30 years of the Initiative in Bristol, Bath and West of England 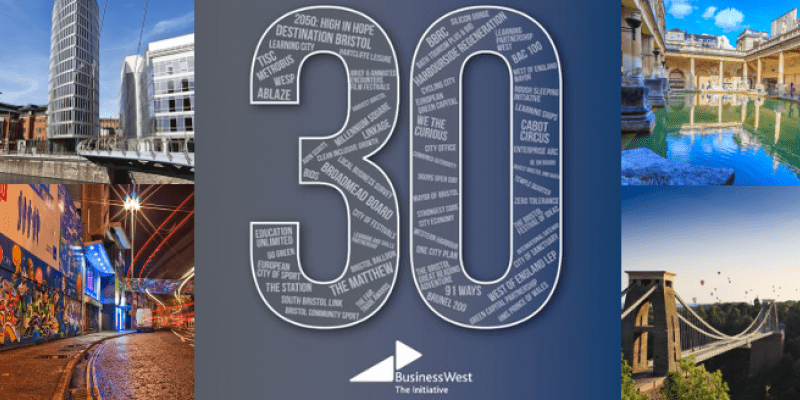 2018 marks thirty years since a group of civic minded business leaders came together to form the Bristol Initiative – which I am now the Chief Executive of.

The Initiative is unique in the UK. A network of civic, business and community leaders, united not by profit, politics or the achievement of personal ends, but the quest to make th region a better place for everyone.

Founded in 1988, the Initiative’s premise was (and still is) based on the notion that businesses don’t exist in a vacuum, rather they are part of the fabric of civic life, and therefore have a responsibility to preserve and protect it.

The Initiative started in testing times – in the aftermath of the St Paul’s riots. This was a flashpoint in our city’s history in which trust in the system and trust in the Local Authorities’ ability to provide people a better life had reached an all-time low.

As successful businesspeople, they weren’t naïve enough to think that they could change the city’s fortunes overnight. The Initiative’s founders were acutely aware of the importance of engaging key city partners, from local government and civil society, and uniting them behind a shared vision for the city region.

This was sorely needed at the time because Bristol’s reputation was seen as a place where good ideas came to die, where vested interests, in-fighting and apathy got in the way of positive change and the common good.

In the immediate years after the Initiative was formed, a partnership between council and commerce began to emerge. A partnership I am delighted to say remains to this day.

While at first the Initiative’s projects were largely concentrated in south Bristol – one of the group’s earliest projects was to establish Hartcliffe Leisure in 1989 – over the past 30 years the Initiative’s impact has steadily grown across Bristol, Bath and the West of England, duly recognising the value of working together at both city and regional level.

For 30 years the Bristol, Bath and West of England Initiative has had a role, whether large or small, in inspiring and delivering a series of successes throughout the region, each time working in partnership with a range of other organisations.

One of the Initiative’s most notable achievements in its first few years was the role it played in securing approval for Bristol’s Harbourside development. A derelict and unloved patch of wasteland splitting the city in two, was turned around with the work of key city partners. Since then this part of Bristol has changed beyond all recognition, and I am immensely proud of the part we have played in this.

For all this, problems remain in our city.

While economic growth and prosperity have transformed neighbourhoods such as St Paul’s, Stokes Croft and Easton from no-go areas to some of the most desirable in the city (because of their local communities not in spite of them), we have a rising number of rough sleepers on our streets. Educational attainment among BAME children may be at the highest it’s ever been, yet air quality is worse now than it was during the industrial revolution.

We are one of the most liveable cities in the UK, but many people cannot afford their own homes. How can our young people set down roots and build their futures here? Where will civic leaders of tomorrow come from without stability at home?

The election of a city region ‘Metro Mayor’ in 2017 marked a new era in terms of devolution from Westminster and the capacity for civic and business leaders to make a difference at a local level on some of these issues.

Working with our city mayor Marvin Rees and our local and combined authority leaders, my colleagues and I are committed to following an agenda which seeks to get the very best out of the public and private sector working together for this city region. Working together to play an active role in the development of this city region for all.

As we reach our forth decade of work, we’re in better shape to meet the challenges of the future than ever. More than 600 people from more than 200+ organisations are active participants or members of the Initiative. We have some strong local leadership and an economy that is growing and aiming to outperform the rest and realise more of its potential.

In these uncertain times, we must continue to stand together as a city region and get behind a bold and inclusive vision for the future. So if like me you love Bristol, partner with us to help make the next thirty years in this city even more special than the last.