It was chaired by the Executive Chair for the Bristol Chamber of Commerce and the West of England Initiative, Cannon Dr John Savage, and attendees included leaders from business, civil society, universities and industry experts. We thank all the participants for their contribution.

As a membership organisation that represents approximately 20,000 businesses across the South West of England, Business West exists to help businesses in the region to start, grow and thrive. A not-for-profit company with 200 staff and a turnover of over £10m, Businesses West has been exploring what role it can play in the current climate and ecological emergency dialogue.

There has been an increased sense of urgency since the publication of the UN Intergovernmental Panel on Climate Change report in October 2018, which said the earth was only 12 years away from a climate catastrophe. It concluded that “urgent and unprecedented changes” were required to keep the ambitious pledge made in Paris of keeping the earth’s temperature rise between 1.5C and 2C. Young people and the public are making their concerns known through a series of strikes and disobediences. Business is also voicing its concerns with Legal and General, and The Prince of Wales Corporate Leaders Group.

Young people have written to the government asking that government 'act immediately' on installing legislation that will achieve net-zero gas emissions by 2050. A number of councils and local authorities in the region that Business West operates have declared Climate Emergencies, as have our members, such as the University of Bristol and We the Curious.

Business West has a track record of providing leadership in this sphere having:

Business West has also delivered resource efficiency and sustainable business support to over 2,000 businesses through the Go Green scheme and ERDF funded Improving Your Resource Efficiency projects, and has delivered services in skills and innovation to develop low carbon industries. In addition, through working in partnerships, it has championed and backed a number of schemes aimed at promoting greater resource efficiency such as the Travel West Commuter Challenge and Ultra Low Emissions Vehicles.

Business West’s own environmental impacts are managed using ISO 14001 and it has recently signed up to the International Chamber of Commerce Chambers Climate Coalition and in doing so, has committed to:

Business West selected a group of 30 members, partners, stakeholders and environmental professionals to take part in the roundtable. Bristol City Council, Bristol Green Capital Partnership, Business Declares, VANA and We the Curious were each asked to present to the group the approach that they had each taken. This was followed by an open discussion with the Chair asking the room to consider the following questions and to share their responses with the group around the room throughout the session to allow for everyone attending to participate fully.

The Chair, John Savage then opened up the discussion to the rest of the room. The key discussion points that emerged include:

There is acceptance across the business community that Climate Change is taking place and an acceptance of the IPCC Climate Report 2018 that to significantly reduce the risks and impacts of climate change, increases to global average temperatures must be held to well below 2C above pre-industrial levels and we should pursue efforts to limit the temperature increase to 1.5C. Chris Dunford from We the Curious said that prior to their Climate Emergency Declaration they wanted to make sure that they and their staff understood the document and shared a summary of the report with their employees. A greater understanding of localised emissions and anticipated climate impact would provide evidence to enable more informed planning and policy decisions.

Matt Griffith, Director of Policy at Business West, explained the need for a greater understanding of local carbon footprints to understand what place based interventions are required and what might be the asks to policy and decision makers. This enables the Climate Emergency to be factored into local plans such as the Industrial Strategy and Spatial Plans.

Bristol City Council have done some work to understand the city's carbon footprint and how it could reach net zero emissions. Their baseline and gap analysis produced by Regen found that in order to reach net zero carbon emissions, considerable investment and change would be required by local and national government and the support of businesses, institutions, communities and individuals. Baseline carbon emissions for the City of Bristol were around 1724 kt CO2e in 2016 which equates to c3.7 tonnes of CO2E per person per year, roughly split into thirds by end-users of domestic, non-domestic and travel demands. The report anticipates that in order to reach net zero carbon by 2030, the greatest reductions will come from the non-domestic sector and the least reductions from the transport (Figure 1). The report envisages that carbon reductions would be achieved by: 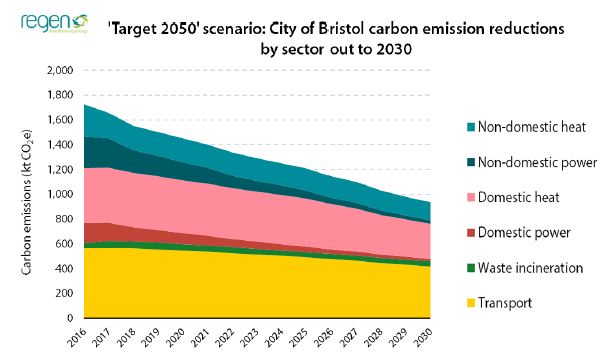 A number of organisations have already produced guidance and support for businesses wishing to declare a Climate and Ecological emergency, these include: Bristol Green Capital Partnership Primer, B Corp Climate Emergency Playbook,  Business Declares Resources and UKSSD Guide to the Sustainable Development Goals and Climate Change. There is a role for Business West and other business support agencies and business networks to ensure that its members and networks are aware of the issue and how it might impact their business, given the opportunity to learn how best to adapt and support to make changes. This support may be delivered by closed roundtable meetings for businesses in a similar size, sector or geography (e.g. urban/rural) to better understand the barriers, workshops, online tutorials, blogs, social media, through upskilling existing business advisors and the creation of new business support programmes.  There is a need to align with existing schemes, in Bristol for example, there is:

It was discussed how procurement could make a greater difference to cutting carbon emissions. Whilst carbon footprint of products and activities and their effect on the environment are used to make sourcing decisions it was felt that this was not weighted highly enough against costs. Participants spoke of the pressure to push down price was disincentivising business to de-carbonise. John Savaged posed whether a shift in taxation might be needed, whilst it was suggested that the tech and finance sectors may have solutions and should be engaged.

There was a sense that employee engagement would be a key factor in the success of a business or organisation taking the journey towards becoming net zero. It was highlighted that some carbon intensive sectors may be at risk and this could cause concern for employees around their jobs and the changes that businesses may choose to take – particularly around travel reimbursement or on-site parking facility. Fiona Ellis from Business Declares spoke about "Lunch and Learn" sessions run by JLL where employees could share best practice were working well, and Bristol City Council were embarking on training for their senior managers. Whilst at We the Curious – a dedicated Futures team made up by individuals from different levels from across the business gave the opportunity for wide engagement and effective take up. The effectiveness of including the voice of young people when engaging in this topic and bringing them into meetings was discussed and had been found to be effective, particularly at board level.

There is an appetite for both global, national and regional solutions to sequester carbon and protect biodiversity amongst the roundtable participants. Participants spoke about their investments into tree planting and wind turbines in India and how they yielded better value and carbon returns than UK based schemes. Others spoke about their efforts to re-wild land across the UK and the potential to develop schemes that would enable localised offsetting by investing in carbon reduction schemes such as retrofitting homes. It was clear that there is an opportunity to develop this industry as there is likely to be a growing demand on businesses wishing to offset residual carbon emissions to reach net zero. There are concerns around the current low value placed on carbon emissions, mistrust in some of the current schemes.