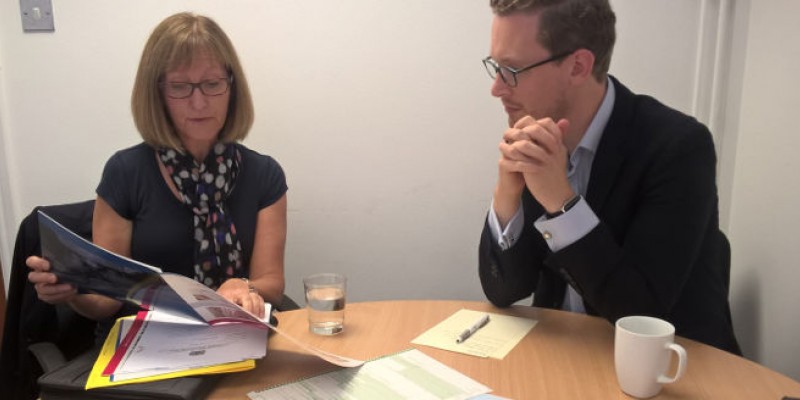 When a snap election was called by Theresa May in April 2017, Darren was re-selected by the Labour Party to contest the seat, and went on to win a surprise victory on polling day, securing 51% of the vote and a swing of 16.2% from the Conservatives. His strong pro-European stance is thought to have been decisive in the win.

A trained solicitor and expert in EU regulation. Darren stated following his election that mitigating the potential impact of a hard Brexit was his number one priority.

At one of his surgeries, myself and Business West’s policy director Matt Griffith were joined by Sarah Hubbard, director of Abbotsgate Foods and James Naylor, Managing Director of Eurocarb, who outlined their specific concerns relating to Brexit.

Eurocarb is a leading supplier of activated carbons into the European market, and as the European arm of Haycarb plc, is currently regulated under REACH as an EU company.

Depending on the outcome of negotiations, James said that Eurocarb will either have to appoint a representative in the EU to submit their REACH registration as the Swiss currently do - with additional costs affecting competitiveness - or alternatively establish a new company within the EU-27.

At present 80% of the firm’s revenue comes from continental Europe, 50% of which is from Germany alone. The imposition of any new tariff barrier would necessitate a move to an EU base, according to James, and he stressed that quick access to the EU market without hold-ups at the border is essential.

Eurocarb also employs EU native speakers as part of its sales team, and James emphasised the crucial role which European linguists play within the company.

Just like Eurocarb, Abbotsgate - an exporter of dairy products – is a business that is strongly reliant on frictionless trade and easy access to Europe.

Sarah voiced her concerns about increased paperwork, remarking that at present the only document she needs to ship goods from a-to-b across the EU is a commercial invoice.

As an exporter in the pre-Single Market days, Sarah was talking from experience when she said that she expected the level of paperwork to rise, and she had the documents to prove it.

“I was in the export business before the Single Market and the customs paperwork was burdensome. The UK food industry is completely geared to working within the EU market and is very interdependent.

“For example, the cheese that I export may be made in Ireland from UK milk, imported into the UK for cutting and packing, exported to say the Netherlands and then re-exported to the Middle East.

“EU tariffs for food products can be very high – effectively 42 percent for Cheddar cheese. If introduced in a ‘no deal’ scenario, this would kill our company’s competitiveness – my customers would just buy Irish Cheddar instead.”

But it’s not just tariffs that could prove damaging for her business.

Currently UK exporters do not require health certificates for shipments of dairy products to other EU countries, but if companies like Abbotsgate are treated as Third Country exporters to the EU post-Brexit, they may well be required to provide certification, affecting delivery times and adding cost.

Mr Jones was receptive throughout the discussion and said he would take up these issues in Parliament.