Business West – championing hydrogen energy for over a decade 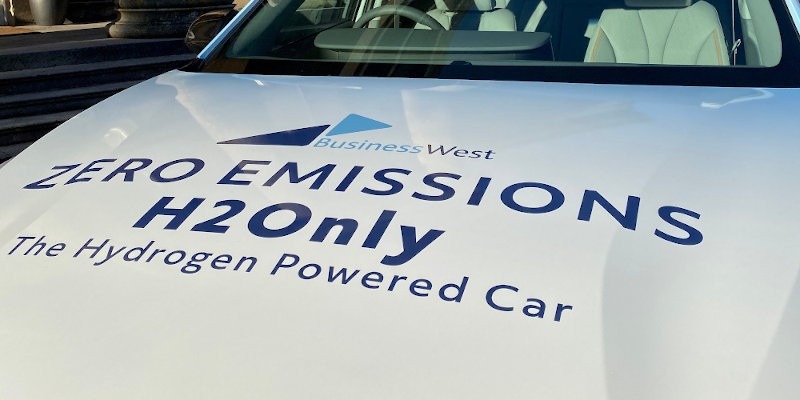 Business West has been championing hydrogen (H2) as a sustainable source of power for over a decade.

We were key players alongside Swindon Borough Council and Honda in setting up the Hydrogen Hub in Swindon. Another key player in the Hub, Johnson Matthey, has recently announced the setting up in the town of a new Hydrogen Technologies business, combining their Green Hydrogen and Fuel Cells entities.

Business West even have a hydrogen powered company car, which we have been using as a pool car for the last 2 years. A challenge being that whilst its range is fantastic, at nearly 400 miles, the most westerly filling station in the UK at the moment is Swindon, so a return trip to Exeter is pushing it!

Bristol Airport, WEAF and Western Gateway are all working to create a Hydrogen Centre of Excellence in the region that builds on the fantastic H2 assets we already have in the South West and South Wales. Business West is supporting all these ambitions with our own particular angle, i.e. making sure we have the skills and talent available locally for the this technology to come to life.

From PhD research engineers through to skilled craftsmen, hydrogen technology brings with it new temperatures, new materials and new techniques and thus, new skills. Led by our DfE sponsored role to pilot new plans for Further Education we are making sure that regional training and talent will form a solid foundation of any future Hydrogen Centre of Excellence.

We recognise that the South West and South Wales cannot do it all by ourselves and hence we have started collaborative conversations both nationally and internationally. At national level we are talking hydrogen with the Cambridge and Oxford Arc, with Jet Zero, Enginuity and others. On a global basis Business West has, via our Innovate UK EDGE team, signed an MoU with a Korean research institute in which we have agreed to foster and share research efforts including into hydrogen technology. We are organising a second research visit to that country for businesses seeking to share research ambitions.

Business West has been spearheading, along with the Western Gateway, the nuclear fusion opportunity in Gloucestershire. The Severn Edge project has been shortlisted as one of 5 potential sites at which the UK Atomic energy Authority will build the future home of the UK’s prototype fusion energy plant – the Spherical Tokamak for Energy Production, or ‘STEP’. Potentially up and running at Berkeley and Oldbury in 20 years time, this revolutionary nuclear power plant, as well as generating clean electricity will be churning out copious amounts of green hydrogen.

The growth in the production of hydrogen and the distribution network it will require, will initially be dictated by the increase in the demand for hydrogen. Airlines, airports and aircraft makers are leading the charge for the aviation sector, driven by the triple whammy that industry is suffering of Brexit, COVID and climate change. EasyJet for example have very ambitious plans to transform its entire fleet of plane to hydrogen fuel. But it’s probably in marine, rail and road that the initial demand drive will come from.

We at Business West will be there to help them with the skilled people they will need.