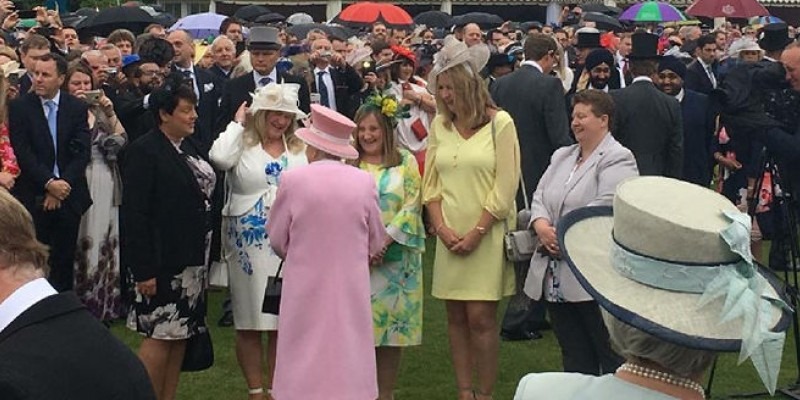 Earlier this year, British Chambers of Commerce (BCC) nominated me to attend a garden party at Buckingham Palace, in recognition of my support for their work in extending international trade services to Chamber members and the wider trader community. Just because you are nominated does not guarantee that you will receive an invitation, so you can imagine my surprise when I received an envelope in the post with the Lord Chamberlains’ seal inviting me to attend the party!

And so, ensued a hectic few days, trying to decide what to wear, hat or fascinator, what sort of dress, heels or flats (because of the grass) and what colour.

On the day itself, I caught the early train to London as BCC had kindly offered to take myself and the other 4 nominated attendees out to lunch, before we headed to the Palace.

Once at Buckingham palace we queued up along with approx. 3000 other people all dressed in their finery and once inside, we were escorted through to the lawns at the back of the Palace. There were bandstands with brass bands playing and tea tents serving tea, finger sandwiches and petit fours, with a very grand tent near the lake, where the Royal family would take their tea.

We wandered around the grounds and bumped into a very well-dressed chap, in top hat & tails who started talking to us and it became apparent that he was a member of the Royal household staff. His role was to ensure that all of the guests enjoyed their day, answering questions about what would happen when the Royal family arrived. At this point, there was no mention of us meeting any of the Royal family and we all assumed that we would just be in the crowd

We chatted with him for about 15 minutes, answering his questions on who we were and why we were there etc; and then all of a sudden he asked us if we would like to meet one of the Royal family! Of course, we said yes straight away (apparently some people do say no!) and were told that we had to meet him at a certain time to be put into line so that we could be introduced. We didn’t know which Royals would be attending, so when he announced that were going to be introduced to Her Majesty the Queen, we all went into a panic practising how to curtsey. We were then taken into the crowds and lined up in order to meet the Queen.

At 4.00pm, the Queen, Prince Harry and Princesses Beatrice and Eugenie came out onto the steps of the Palace and the band played God Save the Queen. We were quite nervous waiting for her to get to us as she made her way through the other people lucky enough to be chosen, but the band started playing Star Wars and Bond film theme tunes, which broke the tension somewhat.

When our turn arrived, the Queen shook hands with us all and we all curtseyed as instructed. The Queen was lovely, very down to earth. She spoke to each and every one of us and she was even joking with us. Afterwards one of the gentlemen from her household commented that we had made her laugh, which he said was quite unusual. Her Majesty even commented that I looked cold and to “Go and get a cup of tea”. After the Queen moved onto the next group of people, the ladies in waiting who were following also chatted to us about our day. They all made such an effort to make us feel special.

Once the Queen had moved away, off we all went to the tea tent to have our tea and sandwiches and a wander around the grounds.

It was the most surreal experience and we kept saying to each other “How did that happen – we’ve just met the Queen!”

We couldn’t quite believe that out of all those people, they picked us. It certainly took a while to sink in. I never for one moment thought that I would actually get to meet her, and it was such a huge privilege and a day that I will never forget.