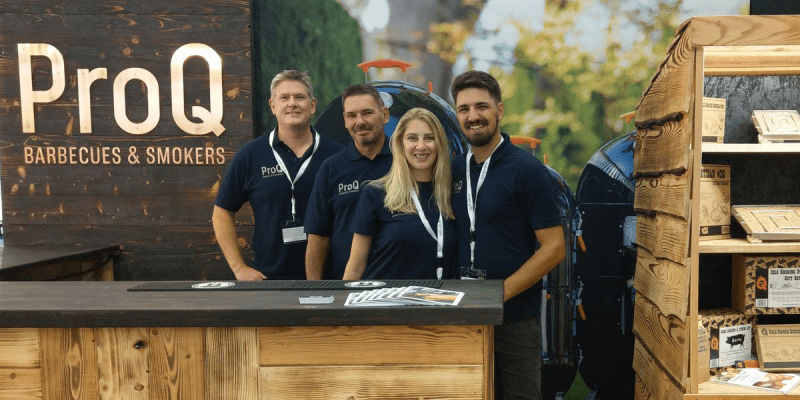 A BBQ product manufacturer based in Cornwall has experienced a 45% increase in exports to Australia between 2019 – 2020. Over the next five years, the company expects to increase its exports sales by 30% year on year.

The company’s success comes as the UK agreed a free trade deal in principle with Australia on 15 June 2021 which has eliminated tariffs on all UK goods, while boosting jobs across the UK.

ProQ Barbecues & Smokers are experts in BBQ, food smoking, and the art of using smoke in cookery and food preservation. The company was founded by Ian and Heidi McKend in 2008, when Ian designed the first ProQ BBQ Smoker. Today, their range extends to more than 70 products and they have earned a global reputation for quality, versatility & innovation.

The company’s Managing Director, Matt Giles, said the company has seen strong growth over the past few years and the cooking-at-home trend throughout lockdown resulted in record demand for their products.

The company exports to a range of markets including Europe, South America & the UAE. Matt said:

“Since becoming successful in Australia, DIT (The Department for International Trade) has supported us to further grow our exports in Europe and other international markets including New Zealand, UAE & Chile. Over the past four years, we’ve attended international Trade Shows with support from DIT – this has enabled us to research new markets and acquire more international distributors.

“Ben Leonard, our ITA, has been fantastic and the wider DIT team has helped us with some useful market research work.”

“Most recently we have received grant funding to help with professional legal and intellectual property services associated with international expansion and we’ve also received support to enable us to translate our website into multiple languages.”

To facilitate the company’s growth in Australia, ProQ has set up a third-party logistics warehouse which means it’s able to supply the market more swiftly. It has also set up an eCommerce site specifically for Australia, so the entire product range is available online.

Matt says: “Creating an eCommerce site in Australia has been relatively straightforward, but the key challenge is the distance the product must move if you offer a nationwide service. Sydney to Perth is the same distance as London to Moscow, so you really have to be careful about your delivery fee model.”

Matt offers a few more tips for companies looking to expand there:

“We chose to base our warehouse operation in Sydney because most of the population and our customers are on the East Coast. If you want to set up on the West Coast, and your products are quite bulky, you’d ideally ship your goods into the Port of Freemantle and then set up warehousing in Perth.

“We have a distributor in New Zealand and having local stock in Sydney is really helpful for them. There’s a free trade agreement between New Zealand and Australia, with a lot of freight moving between the two countries, so you can get products across quite quickly.”

The company is now about to launch into Chile and the recent signing of the FTA there has helped move the market opportunity forward for the business.

Paul Shand, Head of DIT for DIT in the South West said:

“Trade will play an important role in getting our economy back on track and ProQ is a great example of how companies can look to lucrative overseas markets to boost their sales whilst creating more jobs.”