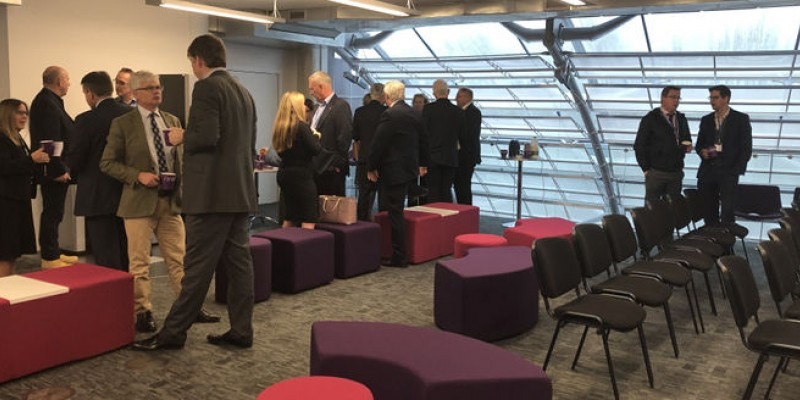 There was a packed agenda for the October Swindon Business & Economy Meeting, with guest speakers from the public and private sector joining together to discuss diverse topics relevant to the local business environment.

Taking place at the offices of Swindon’s Excalibur Communications, Ian Larrard set the scene for the meeting, before introducing Dave Battrick as Initiative Manager. Dave joined the Swindon & Wiltshire Initiative in October following a 12 year stint at the Federation of Small Businesses, where he worked as a Membership Advisor and South West Regional Sales Manager.

Peter Boucher, CEO of the meeting’s host venue, Excalibur Communications, spoke briefly about the CityFibre project, which is rolling out wholesale full fibre infrastructure, to power the next generation of Swindon businesses.

Full fibre infrastructure is an important piece of the puzzle if Swindon is going to meet the grand challenges laid out by central government, locally Paddy Bradley, director of SWLEP, is leading the charge in laying the groundwork for businesses to meet these challenges through the local industrial strategy.

Fresh from the recent SWLEP Conference, where draft local industrial strategy for Swindon & Wiltshire took centre stage, Paddy stressed the need for increased R&D activity if the region is to thrive under the fourth industrial revolution.

At present, Dyson accounts for the majority of R&D spend in Swindon & Wiltshire, said Paddy, who identified the lack of university and a science park in the region as one of the main barriers to upping the level of R&D here. Paddy went on to suggest that the best approach to overcoming this hurdle would involve public and private sector partners working together in priority sectors for the region.

Philippa gave an update on a number of developments as part of the Swindon masterplan, including Kimmerfields, the Fleming Way Bus Boulevard, Station Arrival Quarter, Swindon Cultural Quarter and Wichelstowe.

Philippa also gave an insight into ongoing discussions with regard to Swindon joining ‘England’s economic heartland’, which would provide new connectivity with Oxford and Cambridge, in addition to the proposed Great Western Powerhouse.

Anthony Lovell de Souza, crowdfunding advisor, delivered an engaging presentation on the state of crowdfunding and how it could benefit some of the businesses assembled. Afterwards Business West Director of Policy spoke about Business West’s Trading Through Brexit service, before Ian Larrard offered his concluding remarks.

Ian invited businesses to get involved with the planned manufacturing cluster group for Swindon & Wiltshire. The region has a strong manufacturing sector and the cluster group is intended to bring together manufacturers from across the region to help tackle shared challenges around skills, infrastructure and more. Ian also spoke about the upcoming Swindon Science Festival, which is being sponsored by Business West in order to help inspire the next generation of scientists and engineers in the region.