A guide to devolution, metro mayors and the West of England Combined Authority 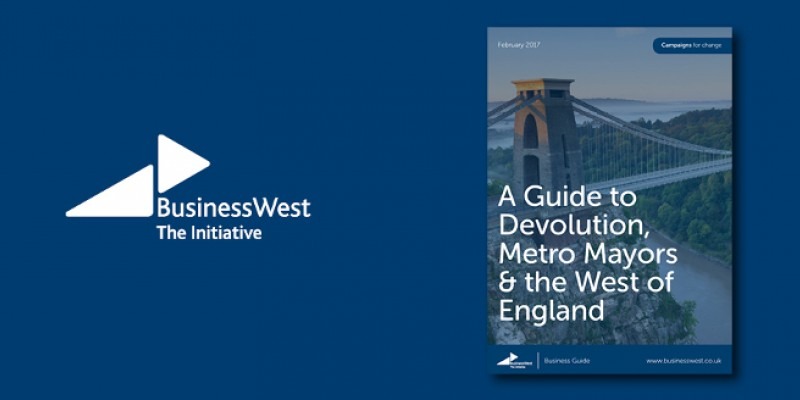 On 4th May, residents in Bristol, South Gloucestershire and Bath & North East Somerset will head to the polls to elect the West of England Combined Authority’s (WECA) very first Metro Mayor.

WECA was established in 2017 as part of a devolution deal struck between Bristol City, Bath & North East Somerset and South Gloucestershire councils in order to give local residents more of a say in matters which concern, for example, housing, transportation and skills.

As part of the deal, in an unprecedented step, central Government has pledged an additional £900m in funding to be invested over a 30 year period in a variety of infrastructure and public services projects.

To educate and inform the public about the upcoming elections and to help map out what devolution means for them, Business West has published a 35-page guide to the WECA entitled ‘A Guide to Devolution, Metro Mayors and the West of England’.

“Given the wide range of opportunities that devolution has the potential to bring to the region, we want to see this deal taken to its full potential; this is a chance for us to shape the region’s future in the way we think best.

“We are fully supportive of this shift toward more strategic, long-term planning across the region, as well as retaining greater control over how the West of England is governed.

“However, we are also concerned that there has been very little public engagement in the devolution process thus far.

“Once the deal is up and running, there will be a complex division of responsibility - between constituent councils, the WECA and the West of England Mayor—which will not necessarily be immediately clear to the public.

“Given the relatively short amount of time until we elect this new Mayor on the 4th May, we want to ensure that the public is sufficiently informed about the changes that will be taking place and the powers and responsibilities of the new Mayor they will be electing.”

The report - which is available now to view and download on the Business West website - presents an overview of the state of devolution in England and gives a comparative look at how devolution deals vary between other city regions such as Greater Manchester and the West Midlands.

“The overarching aim of devolution in the West of England is to link the key drivers of economic growth at a local level by investing in business, skills and infrastructure, and to ensure that local councils can work together in a much more effective manner through pooling their resources and sharing best practices across the region.

“Although the intricacies of how devolution will work in practice are somewhat complex, ‘A Guide to Devolution’ is highly accessible and does a great job at clarifying what devolution means for businesses and individuals in the West of England.”

‘A Guide to Devolution’ will act as a useful resource for local residents wishing to better understand West of England devolution 2017, but its release is just the beginning.

Over the coming months in the run up to the election, Business West will be running a campaign to raise awareness of the devolution process, kickstart the debate on what we would like to see from a West of England Mayor and get businesses and residents engaged.