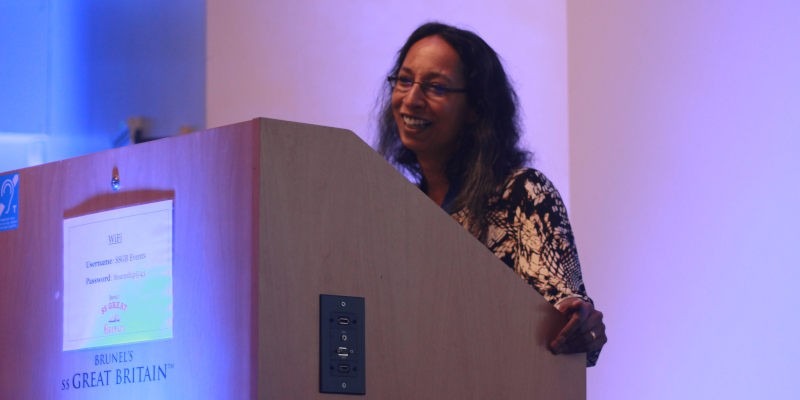 Since the outbreak of the pandemic Bristol Chamber & Initiative members have been meeting once a month via Zoom, with their last in person event taking place back in December 2019.

On an early autumn evening, the largest and most influential business group in the region assembled once again at SS Great Britain to witness the formal handing over of the Presidential medal from the departing Richard Bonner to Jaya Chakrabarti MBE.

With the relaxation of social distancing measures, more than 150 members were able to join us for the meeting, which was kicked off by Chief Executive of SS Great Britain Trust Dr Matthew Tanner MBE.

Matthew welcomed the members present and updated them on the recent expansion of the SS Great Britain site, which now includes Albion Dock in Bristol’s historic harbourside, doubling the Trust’s footprint.

Led by the Trust, this large dry dock has been able to start working again and has just enabled the iconic nightlife venue Thekla to have some essential work done explained Matthew, who also spoke about regional efforts to celebrate and promote the West of England’s deep association with Isambard Kingdom Brunel and what he achieved, to boost the visitor economy.

Matthew then showed a short film that featured Bristol based historian and broadcaster David Olusoga, which gave members a taste of the very exciting immersive multimedia experience proposals that have been developed by the Trust to attract and transport more visitors and local people on a journey through the underwater worlds of SS Great Britain’s history. This is the next major step forward and capital project for one of Bristol’s iconic organisations and heritage attractions.

Canon Doctor John Savage CBE next took to the stage in his role as Executive Chairman of the Bristol Chamber and Initiative. He shared important news about the expansion and development plans for Bristol Chamber & Initiative and Business West before offering his reflections on responsible capitalism and the important role business plays in the region. “The gift [businesses] have that government and local authorities are hedged away from is planning. We have to plan our businesses in every way. Thinking far ahead is a gift we can bring working in partnership with government.” he said.

After a 4 year term as President, Richard Bonner is stepping down to become the new Chair of the West of England Local Enterprise Partnership. Richard spoke about the significant challenges that business and communities in the region have faced since he took on the role of President from UWE Vice Chancellor Professor Steve West.

He also spoke passionately about the responsibility of the Bristol Chamber & Initiative membership to continue to work together to meet the challenges of the future and future generations. “Our children’s future is in our hands” he said and continued “it’s incumbent upon us to address many of those issues and concerns [affecting them]. Whether its where the jobs coming from, where people are going to find the houses that they need, how we help young people to have the skills to the jobs that we don’t even know about yet and indeed address climate change.”

“We know in this room with business and civic leaders we’ve got the ability to make those differences for our children.” said Richard before introducing and handing over the jewel of office to social entrepreneur and incoming President Jaya Charkrabarti MBE.

“I’m absolutely delighted that Jaya has taken over the reins. Jaya has been an incredibly active member of Bristol Chamber & Initiative over many years. She has fully supported me in her role as Vice President and has really influenced much of what we do as Bristol Chamber & the Initiative.” said Richard.

“No pressure!” remarked Jaya as she took to the stage, before giving an illuminating account of her experiences as a member and latterly Vice President of Bristol Chamber & Initiative:

“I’ve been part of the Initiative since 2005, the first time I met John Savage, when I asked him in a shaky voice, how could I, as a microbusiness leader, make a difference? John, our very own Morpheus, offered me both the red pill and the blue pill. A choice between “a willingness to lead beyond my authority” or “continuing to prop up the status quo”. I chose the red pill and have been wrestling with the Matrix ever since.”

She continued: “Our Chamber network has grown on the foundations of a strong love and vision for the West of England. Not many can say that and have a book to show for it. I am proud to be part of the West of England Initiative and our network of Chambers. It takes a special sort of business leader to recognise that a sustainably successful business can only thrive where there is social and environmental justice. And we have these leaders in spades.”

“We can achieve much together and I’m truly excited about what the future holds for us if we’re bold enough to imagine just how bright it can be.” Jaya added before James Durie, Chief Executive of Bristol Chamber & Initiative at Business West and Initiative Manager Victoria Matthews took to the stage.

“It’s fantastic to be back meeting together face to face” said James, stating the Initiative’s intention to continue with in person events, before welcoming Jaya as President and highlighting her “clear commitment to our city and our place”.

Wishing Richard well and thanking him for his contribution to the Bristol Chamber & Initiative in the last four years James said: “A huge thank you all the work that you’ve done and the role you’ve played for us. You’ve given us an enormous amount of your time and I’m hugely grateful to you. It’s been brilliant to work with you. You’ve challenged me and supported me and our team in lots of different ways. I wish you the very best of luck as you step into the role as Chair of the LEP, which is no small task.” He also thanked First Bus and new Managing Director Doug Claringbold for enabling members to have free bus transport to attend the meeting and also to the Public Health teams across the city region who have worked so hard to enable us all to manage and keep safe through the last 18 months.

Initiative Manager Victoria Matthews spoke about the Initiative’s main activities throughout the pandemic and welcomed members who’ve joined since our last in-person meeting. She highlighted key lobbying achievements during the pandemic, the business support on offer and thanked members for their input into these and associated activities. Victoria also spoke about some of the business support services Business West has launched within the last 18 months to spur innovation and grow global exports from the South West of England.

Since the end of last year when Business West declared a Climate Crisis the organisations has moved to become carbon neutral and aims to achieve net zero carbon emissions by 2030.

In order to meet this ambitious target, Business West issued a climate change position statement outlining three steps towards reducing Scope 1, 2 and 3 carbon emissions and accelerating the decarbonisation of business activity across the region.

Nina spoke about recent activities to engage with businesses across the region on the topic of climate change, including the Net Zero Tour Bus, before bringing the formal part of the meeting to a close.

Following presentations from our various guest speakers, members enjoyed supper and refreshments on the deck of SS Great Britain together with a live music performance from local musician Lady Nade courtesy of the Bristol Beacon. Members thoroughly enjoyed her unique style of indie, folk and Americana.