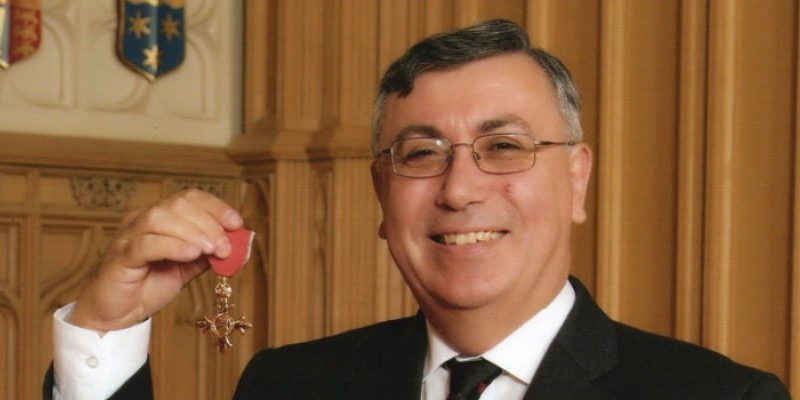 Man and boy, Business West’s Mike Godfrey has been at the heart of the automotive industry for nearly 40 years.

Mike, a non-executive director of Business West, was one of the very first people to help set up Honda’s operation in Swindon 35 years ago.

As well as one of Honda’s key people in those early days in the UK, Mike has been a big advocate for skills development - particularly among young people.

As he retired, he talked to me about those early days with Honda in Swindon when some Honda cars were actually assembled at the Austin Rover plant in Longbridge, Birmingham, and Cowley in Oxford.

“I spent half my working life in their plants whilst still developing the Honda Swindon operations. In those early days when I joined Honda in 1985, we set up the operations in Swindon to basically do a pre-delivery inspection operation of cars imported from Japan.

“Austin Rover came into the picture when they agreed to build the Honda cars under licence at the Longbridge and Cowley factories.

“They then came to Swindon to ensure the quality process had been achieved before we despatched the cars to Honda customers in the UK and Europe.

“We had a bit of a challenge with to match the quality of the Rover cars to those being imported from Japan, so I spent two or three days a week at Longbridge or Cowley trying to persuade our esteemed colleagues in the UK car industry that the quality had to be improved.

“It was an ongoing challenge to get them to accept why they needed to improve and how then they could improve sustainably.”

Why was there unreliability? I asked.

“Poor manufacturing design in the first place. Although the base design was probably good they were never made to be built both easily and with foolproof processes. So, it was easy to make mistakes during manufacturing.”

His first taste of the motor industry came when given a school project to help refurbish an old Morris Oxford car.

“That really turned me on to wanting to be in the car industry”, said Mike.

He was living in Bedfordshire and the natural progression was to join Vauxhall Motors in Luton.

They took him on as a graduate apprentice - he went to Brunel University and joined them afterwards as a reliability/quality engineer in 1976.

“Our task was to set up the site and build buildings, recruit people and train people.“, he said.

Initially, it was just an inspection operation for finished vehicles for the first three years of operations.

He had a whole variety of jobs with Honda over from setting up the Swindon site to being quality manager to engineering manager to corporate governance, corporate affairs and safety and environment for the whole of Europe.

“I ended as the business administration manager and one of my first jobs in that role in 2012-2013 was to make about 800 people redundant which was not very pleasant.”

I ask him what is Honda’s manufacturing philosophy?

“Its focus, primarily, is on the Three Joys.

“It’s the fundamental philosophy from Mr Honda when he set up the company in the early 60s making cars in Japan.”

“He came to Swindon and asked me: ‘When are you going to start doing your real job?’

“He said I was just doing paperwork - the real job was making something. He was right.”

How does he see the motor industry now?

“There isn’t a UK car company now apart from probably Morgan. The rest of it is either owned by Indian, German or Japanese companies.

“If you take the case of Honda, it has been a bit of a perfect storm which has led up to the very recent closure announcement, although still subject to consultation. To me, it is very devastating.

“You have got the change of government policy and philosophy in terms of engines. In Gordon Brown’s days, diesel was good and unfortunately now, diesel is not good.

“Certain companies, including Honda, made significant investment to upgrade their engines to meet the latest standards.

“Basically, they are now selling less than a third of their expected demand for the diesel engine because government has said that diesel is bad and you have got to go to electrification or a hybrid, and the cost to produce those types of cars is hugely significant.

“You then add Brexit into the equation, so I would imagine that the manufacturers in Japan are now saying: Why do we make cars in the UK? Does it really make sense any more? Especially as the EU has agreed a free trade agreement with Japan, meaning that by 2026, cars imported from Japan will be tariff free.

“You have got to look for the most efficient place to produce the parts at the lowest cost.

“There are three measures to be achieved on a car part: quality, cost and delivery.

“Hence, the panic over Brexit with parts coming into Europe from all over the world and potentially 20 mile queues of lorries waiting to get into the UK.”

What is his feeling about the onset of electric and battery operated cars?

“I have got mixed feelings on it. They themselves come with environmental issues - there is limited availability of lithium in the world. How sustainable is that?

“And what about the infrastructure here, both in terms of electricity supply capability and chargers?

“People want to promote battery and electric. Undoubtedly, it has some advantages but the charging facilities are just not there yet. Shell are looking to put at least two chargers into their wholly owned petrol stations but it is still not enough.

“Another solution would have been to bring in a scrappage scheme - and take the diesel vehicles that are Euro 4 or less compliant off the road. We should not be concerned about the emissions from these more modern diesel vehicles - especially Euro 6 compliant.

“We should not be banning or dumbing down new diesel engines. In terms of overall emissions, the modern diesels are arguably no worse than petrol.

“If I switch from diesel, I will go for a petrol hybrid. I actually believe the future is hydrogen.

“It is the most abundant substance in the universe. In Swindon, there is the Hydrogen Hub and there are two hydrogen filling stations here.

“There are seven vehicles running around Swindon - more than any other town in the UK.

It is the future. The ultimate final solution - probably in 15 years’ -  time will be hydrogen.

Mike’s interest in the whole gamut of the motor industry is only matched by his enthusiasm over the years for the training of young people. Before retirement he was chair of the Skills and Employment Board in Swindon and highly respected in that role.

“Our young people need to have employability skills”, he says.

So, what’s wrong with our system of developing young people?

“It is about careers. I have taken these five GCSEs but what can I do?

What options are available to me?

“Young people still do not have access to the necessary information, advice and guidance, and that is the fault of the schools system and to some extent, businesses as well.

“They also need to be involved in enabling the employability skills in terms of communication and practical skills.

“The interviewer at BMW will say: ‘What have you done outside school today? What hobbies have you got and that can spark interest?

“Have you managed to repair anything? Regardless of the GCSEs that have got you through the door, what activities you have done outside school and what hobbies you have which are relevant, you will get a job.

“So, it is the other practical skills that are today so important.

“There is no direct fault of the schools because they are still being measured on qualifications. They also don’t have enough time in the curriculum.”

I suggest that young people’s employment aspirations should be encouraged earlier in their school life.

“You are spot on”, he tells me. “It has to come in the last year of primary school.

“Switched on companies are doing it - BT have a fantastic programme on coding in primary schools. They recognise the need for that.

“We have got to try and do this with the small and medium sized businesses who don’t have the time and resources to do that sort of thing.

“I am not knocking the fact that universities have a place and it is a very good route for some young people but going through an earn and learn apprenticeship can be very valuable.

Mike is clear - like many businesses I talk to-that the route to employ an apprentice must be made a lot easier.

“My plea is for companies to use the Apprenticeship Levy to take on the 16 year olds and the eighteen year olds. Give them the chance to earn and learn at the same time.

“And the fact that the Levy says you have to ensure they spend a day a week on average back at college does not help smaller companies. We need more flexibility there.

“The government can say you can go onto the website and find out everything on apprentices. I am sorry, but an SME doesn’t have time to do that. They want someone to come in and tell them what can be done.

“You have to have a turnkey approach and inform them, what can be done and almost do it for them.”

The new T-Levels, he says, require about more than 40 days of work experience.

“It’s scaring business rigid if those are the sort of demands being placed on them.”

What does he think the government have got to do now about apprentices to get back on some sort of even keel when it is obvious they are not going to achieve their much trumpeted target of 3million apprentice starts by 2020, the end of this parliament?

“They have to revisit the Apprenticeship Levy. It has got a good basis behind it but it has never been explained properly.

“The first year apprentices talk the same language as the 16 and 17 year olds at the school. That is so powerful it is unbelievable.

“Doing an apprenticeship as it was when I started, I would do it all again. At Vauxhall you were on the lathes, on the mills and making all the bits and pieces.

“I would support apprenticeships any day of the week.”

Mike, 64, set up his own consultancy company when he left Honda six years ago - he still works for Honda looking after their pensions.

He is staying on as a non-executive director of Business West in Swindon and its parent company, GWE holdings.

In retirement, Mike is now going to volunteer for two charities - one dealing with mental health and the other with child safety.

“Lots to do”, he says modestly. And oh, yes. four grandchildren to help look after.