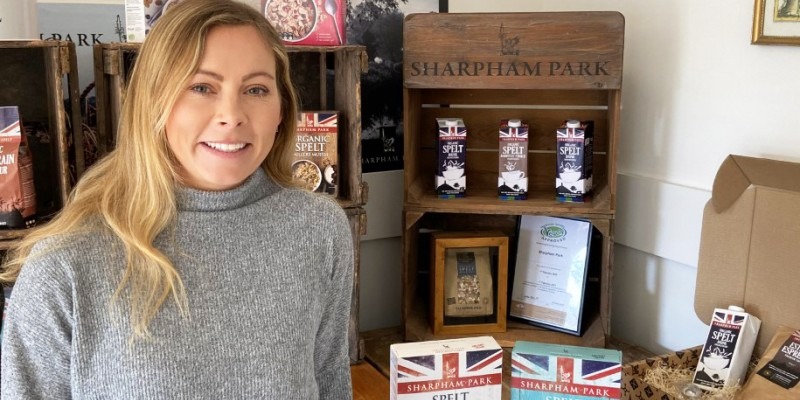 A Somerset based spelt producer has increased its overall exports by 87% from 2019-2020 and has recently signed an export deal with India, with exports set to double over the next 12 months.

Sharpham Park was established in 2003 when Roger Saul, founder of Mulberry, bought the land around the family home and embarked on restoring what was a run-down dairy farm into an organic farm. He created the Sharpham Park brand aiming to bring spelt back into the British diet. The company has sustainability as one of its core values, with no part of the product being wasted. When the flour is milled and produces excess bran, this is used in the cereals or fed to the deer in the surrounding parkland.

In 2021, the company wants to increase its exports by 150%. They also export to Belgium, France, Canada, The USA, the UAE, and China.

“Sharpham Park has been exporting for around 15 years. I think we work as an export company because the brand is attractive to overseas buyers who want to purchase high quality British produce.

“Our packaging is very British looking with the British flag. Businesses also like the interesting back story and heritage as well as the health benefits of spelt as an alternative to flour to use in cooking or baking.”

According to HMRC data, in 2020 exports of cereals to India (including flour) totalled approximately 95 million, an increase of 39% from the year before.

The company first began speaking to its Indian customers five years ago through an introduction made by the Department for International Trade (DIT).  Kayleigh says that while the relationship has been long established it has taken some time to make the sale:

“Our Indian customer was creating a new business opportunity, so they had a lot to set up and this meant we had to be patient.

“Over the last year, they got the ball rolling in setting up their company, Spelt India. They wanted to get as many of our products as possible and are now looking at creating an Indianized cookery book with spelt, adding spices to the muesli and creating Indian baking dishes using spelt as an ingredient.

“We’ve been working with Hilary Charman, our ITA (International Trade Adviser) for over ten years. We use a lot of information on the website and colleagues have taken advantage of export related workshops organised by DIT. This training has been so useful to get us started with exporting.

“We’ve also spoken to the Chamber of Commerce over in India to ask for advice regarding exclusivity on our agreement with them.

“DIT has been so helpful in introducing us to organisations that could help us in market, such as the British Chamber of Commerce.

“We’re also looking at opportunities in Norway and Chile. We were introduced to our Chile contact through DIT.”

Kayleigh says that while exporting to India has been a hugely positive step for the company, it has not been without its challenges. She said:

“You have to be prepared for unforeseen pitfalls in customs and local legislations. Because we’ve had a good relationship with our distributor that has helped to overcome this, and we’ve tried to provide them with a supply of information and have been proactive in coming back to them quickly.”

In terms of the advice she would give to other companies looking to export to India she said:

“A good relationship with the buyer is really crucial and it’s also important to be patient. Because we’ve built a strong relationship, when we have come up against customs issues, our customer already trusts that we’ll get everything to them quickly.

“I would recommend using DIT resources based in each country. DIT can give you introductions and let you know of any potential distributors. Utilise the contacts as much as possible because its been a huge help to us.”