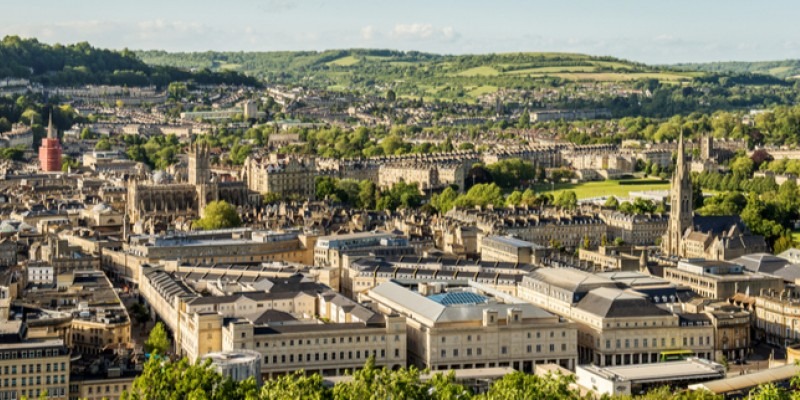 Chartered Surveyor Alistair Colston has been re-elected as President of Bath Chamber of Commerce at the 117th AGM. But unlike his predecessors that was done in a video conference at the end of a truly amazing year.

It was only when I was preparing my annual review that the enormity of the changes we have seen became clear and it’s interesting to reflect on some of them.

When we held our last AGM members were interested in considering what the impact would be of the Liberal Democrats recently winning a large majority in the local elections. They also had an eye on what was happening nationally, with the change of leadership in the Conservative Party and the prospect of a Parliamentary Election. Oh, and there was the slight matter of Brexit.

Locally lots of things were happening. We learned that footfall data showed Bath City Centre was doing well, Bath Rugby Club was working up the latest version of its Stadium plan, the Clean Air Zone for Bath was on the way, the University of Bath was considering how to increase the number of Postgraduates and Bath City FC were optimistic about a scheme to help regenerate the club and the surrounding area, including the creation of some student housing.

September saw the first stage of the public examination of the Joint Spatial Plan for the sub region which was to set out where about 100,000 new homes and jobs would go and Will Godfrey was appointed as the new Chief Executive of Bath and North East Somerset Council, a man who fully understood the need for a strong local economy.

There was much talk about the Climate Emergency. Our members decided it wasn’t appropriate for the Chamber to declare such a thing, but we talked at length about some of the measures businesses could employ and agreed we would use some of the Chamber reserves to provide an award for best practice.

At the beginning of March, we held our last face to face meeting, at which people were explaining their plans to deal respond to Covid-19. One architect said 30% of their staff had signed up for home working and they were ensuring their had the right chairs and office equipment, there was much talk about hand cleaning and not holding meetings with more than 10 people.

But by the next month things had changed dramatically as we held our first video meeting.

Members provided updates so there was a good flow of information and an understanding of how different sectors were coping with a fast-moving picture. Business West created a “Trading Through Coronavirus” portal on its website to provide useful information.

One company had almost instantly switched 550 staff to working from home, another had trialled home working a few weeks before so were well prepared to accelerate things when the time came. There was heartening news that Hong Kong was going back to work and our universities were producing protective equipment

But already there were concerns being expressed about how things would look six months down the line and some staff were struggling due to their home environment and the challenge of providing child care.

On the other hand, some silver linings were already being noticed, for example finding that some meetings could effectively be run on Zoom, saving time, money and travelling costs. It was already being suggested that may become part of a new post virus business norm. Others noted change was being accelerated and people were much more open to new ideas than they had been in the past.

Much recent conversation has been about how the future of business will look, asking some fundamental questions, such as is an HQ really needed, what will be the balance in the office vs home working debate. The consensus has been that it is still too early to say with any certainty, in fact uncertainty is really the name of the game at the moment and it’s likely to be so for some time to come.

But I think what the last year has shown us is that our businesses are resilient, imaginative and light on their feet. They’ll be using all those attributes to maintain the strength of our local economy all the way to our next AGM.