The City of Bristol is delighted to be formally affiliated with HMS Prince of Wales, the UK’s biggest and most powerful vessel and aircraft carrier ever to be built by the armed forces.

The vessel will patrol the world as a national, strategic defense asset and can deploy disaster relief to countries around the world. There is now a key opportunity for Bristol to put its 'stamp' on the VIP public areas of the ship to bring to life this affiliation and help showcase the innovation, energy, dynamism and character of this city. Heads of state and CEOs of major multinationals will be hosted in these ‘day cabins’ as she goes around the world representing the United Kingdom.

Business West, working alongside Lord Lieutenant, Peaches Golding & the Bristol Post enjoyed celebrating this exciting new 50-year link & affiliation at a special celebration held at SS Great Britain on 10th May with representatives from across the Bristol community.

It was a fabulous event attended by more than 100 business and community leaders. On the dock next to SS Great Britain, guests were entertained by the sunset salute, splendidly performed by the Royal Marines Band. Peaches Golding said, ‘Business & community leaders from the Bristol city region were inspired & enthused by the significance of our affiliation with aircraft carrier HMS Prince of Wales: diplomacy, disaster relief, projecting power and national security’. 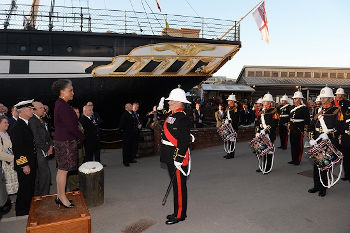 Various local companies have been involved in the ship build and many more local organisations have pledged to help with the VIP areas. Power and propulsion equipment was provided by Rolls-Royce and L3 MAPPS whilst the screens on the flight deck are supplied by Datronic (see case study on opposite page), whose UK base is in Thornbury in South Gloucestershire. Other companies involved include Seetru, Bristol Metal Spraying and Babcock.

The captain of the ship came to Bristol to promote the region’s technology around the world and boost tech skills in the city. The HMS Prince of Wales is officially affiliated with Bristol and Liverpool and its crew will visit Bristol schools to promote science, technology and engineering.

“It is a huge privilege to be the first Captain appointed to HMS Prince of Wales and we are delighted to be affiliated to the maritime city of Bristol and the shared opportunities it presents,” said Captain Ian Groom MBE, Captain of HMS Prince of Wales.

James Durie, Chief Executive of Bristol Chamber & West of England Initiative at Business West “Bristol’s affiliation to this new ship is a prestigious and very exciting opportunity and we are delighted to be able to play our part. Working closer with the Royal Navy and our armed forces is very important to the business community with benefits for all.  For our employers and their staff linking to this state of the art new ship will undoubtedly help them build new networks & contacts and showcase many trade promotion opportunities across the world.”

Bristol is proud to be associated with the ship – not only does the city and region have a long history of global seafaring but this iconic vessel will represent Bristol’s expertise in engineering, manufacturing and creativity. The aim is to capture the diverse character of our city that can be showcased as it travels around the globe.

HMS Prince of Wales is set to be handed over to the Royal Navy for duty in 2019 and will be ready for front line duties from 2023.

The ship & its crew want to build long term partnerships with people, groups & organisations in Bristol. To find out more about Daktronik and their involvement with HMS Prince of Wales, please click here.

10th December 2019 was a momentous day for the Royal Navy, the nation’s newest and biggest aircraft carrier HMS Prince of Wales and the City of Bristol.

This was the day that HMS Prince of Wales was formally commissioned into the fleet in the presence of Her Royal Highness The Duchess of Cornwall - The Lady Sponsor at Her Majesty’s Naval Base Portsmouth.

Captain Darren Houston was appointed as the first sea going captain of this great ship to lead the men and women who form the crew of the ship’s company.

The Commissioning Warrant was read and the White Ensign hoisted.

Captain Darren Houston the Commanding Officer addressed the crew with the Act of Dedication and asked for God’s blessing using the ancient call of a Gaelic Blessing of 1589.

Bristol was very well represented at the commissioning by the Lord Lieutenant Peaches Golding, Lord Mayor Cllr Joss Clark, The High Sheriff of Bristol and of course the Choristers of Bristol Cathedral Choir who sang superbly for the 3000 invited guests including the First Sea Lord of the Admiralty and the US Ambassador Woody Johnson. 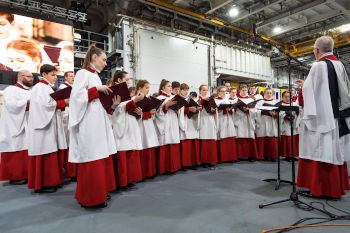 At the end of the formal ceremony The Duchess of Cornwall met and talked to the Cathedral Choristers ensuring that this was a day that would never be forgotten. 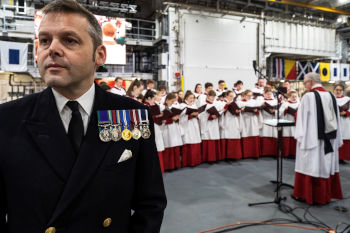 The last two years have been a remarkable journey for the Bristol Affiliation since the first ship’s Captain Ian Groom MBE brought the wardroom of HMS Prince of Wales to a reception on the SS Great Britain in May 2017. This moment was a symbolic binding of Britain’s newest aircraft carrier to Bristol and the affiliation between the City and County of Bristol and HMS Prince of Wales has over those two years flourished and grown. The first act was to form an affiliation board with the Lord Lieutenant Peaches Golding as President and Chaired by a local businessman Stephen Parsons. 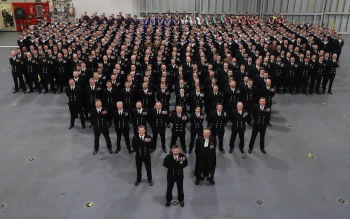 This was the first time in more than 40 years that the City of Bristol had been affiliated to a capital ship of the Royal Navy the last being HMS Bristol in the late 1970s.

The affiliation board brought together The Royal Naval Regional Command, The Lieutenancy of the County and City of Bristol City Council, The Bristol Lord Mayor and the Elected Mayor, Bristol Chamber of Commerce and Bristol Initiative, local businesses, schools, universities and educationalists, and the MOD Abbey Wood.

Two visits to the Royal Naval Dockyard Rosyth in 2018 and 2019 were arranged for members of the affiliation board and local witnesses to witness first-hand the construction of the second QE-class aircraft carrier.

Afflation occasions and events have celebrated the partnership between HMS Prince of Wales and Bristol including a MasterChef evening in Avonmouth in November 2018 hosted by Bristol catering equipment firm Nisbets, bringing together the competitive skills of chefs from the ship and local chefs from Nisbets.

Sailors from HMS Prince of Wales took part in official Remembrance events in Bristol to mark 100 years since the end of the First World War.

On Saturday May 6th, at a Choral Evensong in Bristol Cathedral the ships White Ensign was presented. The White Ensign is currently back on HMS Prince of Wales and is to be flown at sea after Commissioning. It will be re-presented to Bristol Cathedral in 2020 and will thereafter hang in the nave near the entrance to the cloister.

In July 2019, HMS Prince of Wales helped celebrate the Bristol Harbour Festival by sponsoring and giving a prize to the best cardboard boat able to sail, manoeuvre, and achieve drone deck landings.

In August 2019, sailors from the HMS Prince of Wales Rugby Team joined the squad of the Bristol Bears and the Lord Lieutenant for their preseason photo shoot.

Thanks to Bears’ coach Pat Lam and CEO Mark Tainton for their support in making this further tangible link between Bristol and HMS Prince of Wales happen.

On 18th September 2019, HMS Prince of Wales left its construction at the dock of Rosyth and sailed into the North Sea for trials.

More than 8000 tests were undertaken to ensure the ship is safe and fully functional. The ship’s stats are impressive: 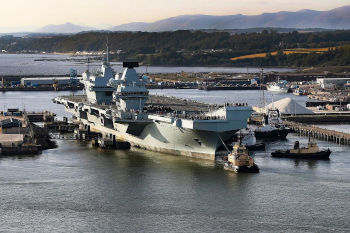 The links with Bristol were further celbrated on 2nd December when the ships crest was unveiled in ther entrance to City Hall by the Lord Mayor. 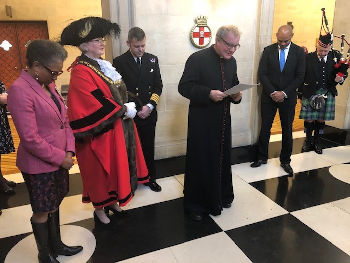 Businesses across the West of England have until the 16th June 2017 to apply for the TravelWest grant which will go towards the cost of incentivising their staff to take up more sustainable forms of...

The Initiative ‘The Initiative’ was founded in Bristol by a group of forward thinking business leaders almost thirty years ago at a time when UK cities, including Bristol, were in turmoil. It was...
Our Initiative story

Business West works closley with business leaders and forward-thinking entrepreneurs across the region, identifying through active engagement on the key issues in business that impact business and...
Leadership & Representation