Our Vision - West of England Initiative

A Business Vision for the West of England City Region

2050: High in Hope - A Business Vision for the West of England City Region

"The greatest societies in history have had exceptional aspirations"

Inspired by the influential 1909 Plan of Chicago, which provided the city with a direction of development, 2050: High in Hope is a visual and written interpretation of a business vision for the West of England city-region. It is a strategic master plan for the region and a blueprint of the measures and goals that Bristol could make in order for it to realise its full potential as a leading European economic and cultural city.

The 2050 vision is The Initiative’s framework and sets out our beliefs, values and goals for the region. However, the proposals and ideas put forward are not absolute. We welcome the continuation of debate, the collection of evidence and the development of concepts into achievable realities in order to develop the vision further, so the West of England can continue to expand and prosper.

2050: High in Hope is of vital importance to the West of England city region. Over the next 40 years, the Bristol sub region will bear witness to rapid population growth. Between here and 2050, the sub region will need to accommodate an additional 500,000 people, requiring 300,000 new jobs and a further 200,000 new homes. Without a vision and thoughtful strategic planning, the unavoidable growth will be haphazard, unproductive and possibly, corrosive.

Combine this imminent rapid growth and the fact the regional spatial strategy has been scrapped and national planning policy lacks either a city-regional or visionary element, a clear sense of direction for development is needed now more than ever. The Vision fills the void in strategic planning and addresses the inevitable growth of the sub region in a calculated and considered manner.

For the 2050 vision to be a success there needs to be an ongoing debate about many of the issues contained within and a continual refresh of new ideas and opportunities. Success will also need to be measured against achievements in terms of local and central government commitment to supporting change and helping to deliver on key recommendations. The schedule below outlines 10 key recommendations and actions highlighted as critical to the future growth and prosperity of the city-region. Alongside each issue is a clear indication of who needs to support and agree the proposed action. 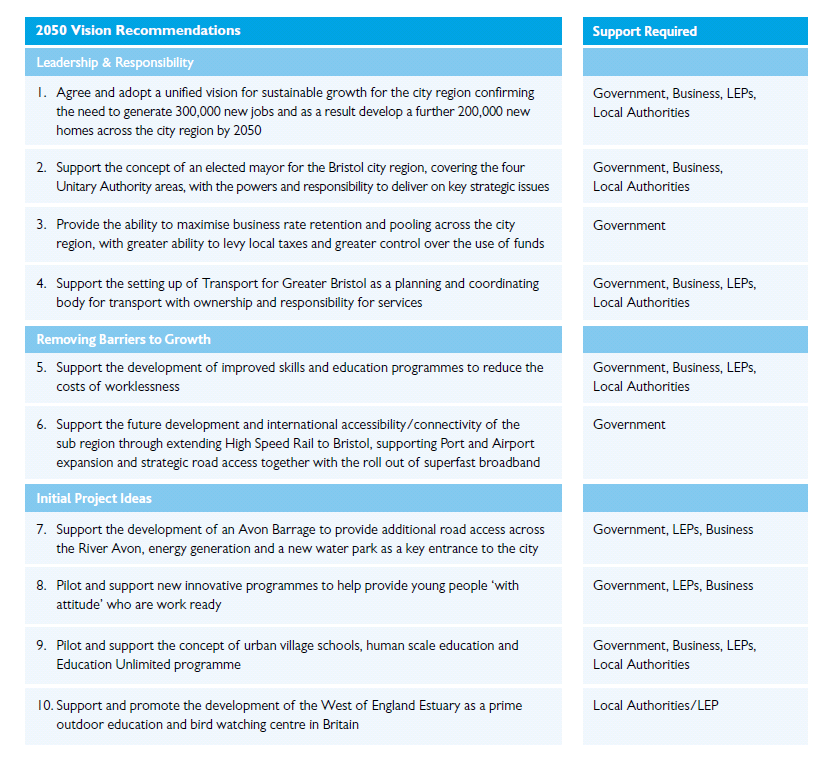 Methods and Develop of 2050: High in Hope

The 2050 vision emerged through a succession of discussion forums, workshops and briefing sessions. Starting in October 2009 these sessions informed people about what is happening in comparable city-regions in other parts of the UK and Europe. They also facilitated discussion of the specific qualities and needs of the West of England and started the process of bringing together a coherent strategy for managing growth.

Participants in the creation of the Vision included Initiative members, architects, urban designers, town planners, academics, property developers and transport experts. Local residents, young people and local authorities also had a role to play in its creation, all of whom regularly attended strategy meetings to fine tune proposals.

The 2050 vision goes beyond existing and planned strategies and documents; it reflects and borrows the best bits of all those plans but takes them a step further into a longer timeframe, where the emphasis will be on sustainable growth and the continued development of the city region as a successful economic unit.

Some of the flagship projects of the 2050 vision in development are: 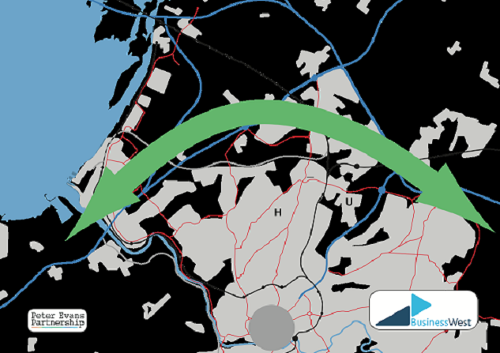 The Enterprise Arc marks the areas of high growth across North Bristol, stretching from Avonmouth in the West to Emersons Green to the East.The Enterprise Arc area of North Bristol will witness a significant increase in houses and jobs in the future, with three major applications currently in progress to develop the Cribbs Patchway, New Neighbourhood and Filton Enterprise Area. The growth in this area is crucial to the rest of the city and The Initiative is working to stress the importance of this area ensuring that adequate infrastructure is provided to facilitate this growth and link the development areas across the North to the wider city of Bristol. 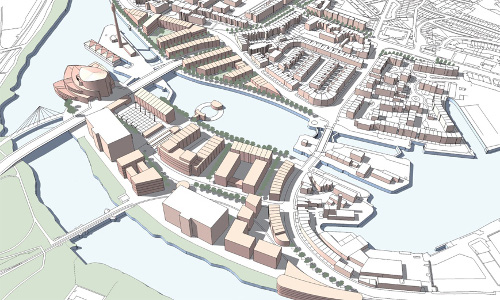 One of the major projects in our 2050 Vision is the development of the Cumberland Basin. The current cost of maintaining the existing high-level bridge and its associated approach roads is excessive. As a result, we believe that the bridge should be replaced with a new low level crossing and to transform the surrounding land for new houses and offices to create an impressive gateway into the city. The Initiative is also working on building a barrage across the Avon in order to protect Central Bristol from anticipated major flooding and to turn the water into a major environmental, cultural and economic asset for the region.

What looks like the beginning of a successful roll out of the COVID vaccination programme could be the prelude to a return to something like the life we used to call “normal”. It remains to be seen...
Ian Bell
Business West
Posted on: 21.01.21
Read more

Following a six month delay due to the Covid-19 pandemic, businesses in Redcliffe and Temple will be invited to vote for the area to become a Business Improvement District (BID) in a ballot which...
Kye Parkin
Business West
Posted on: 14.01.21
Read more

The Treasury has today (5 December) announced a funding pot of £4.6 billion to provide grants of ‘up to’ £9,000 per shuttered premises. Whilst this immediate cash flow support for business announced...
James Durie
Business West
Posted on: 05.01.21
Read more

From Saturday 19 December Bristol and North Somerset move from Tier 3 – Very High down to Tier 2 – High local restrictions as a sign that COVID-19 rates have receded in our region. This means that...
Claire Ralph
Business West
Posted on: 17.12.20
Read more

Bath is an unusual place for many reasons, but surely one of the strangest is the fact that the local authority is the owner of a very large proportion of commercial property in the City, worth many...
Ian Bell
Business West
Posted on: 10.12.20
Read more