10 inspirational quotes to motivate you to start your business 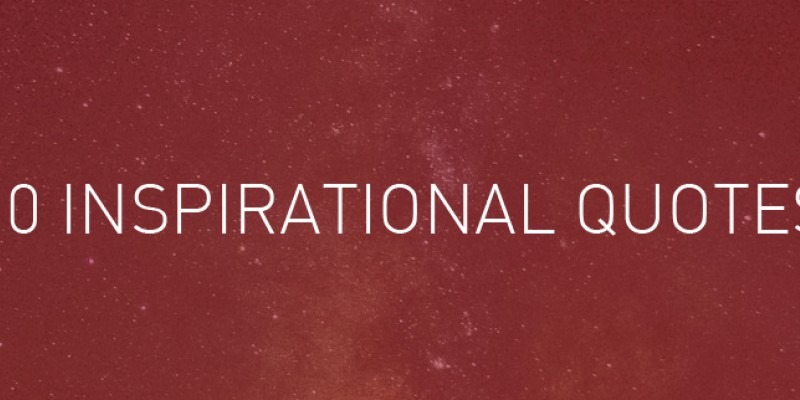 When starting your business there will come a time when you may be feeling overwhelmed and in need of some inspiring words of motivation. Inspirational quotes may seem a little too cheesy for some, but words of wisdom from successful entrepreneurs could be the push that you need to get motivated to solve a problem or realise an idea.

We have pulled together our 10 favourite quotes from people that have successfully turned their ideas into realities and know first hand the challenges that many entrepreneurs face, in hope that one of them might light a spark inside of you!

Steve Jobs was forced out of his own company (Apple) in 1985, giving him the opportunity to further express his creative ability. Jobs then purchased what came to be one of the biggest animation companies in the world, Pixar. He rejoined Apple in 1997, playing a leading role in making it the successful company that it is today.

Sir Richard Branson dropped out of school at the age of 16, later setting up Virgin Records, which then led to the creation of the Virgin Group, which today owns 200 companies in over 30 countries.

Dorsey was interested in computers and communications from a young age; when he was just 15 he wrote dispatch software that is still used by some taxi companies today. Now CEO of Square Inc., Dorsey is also chairman of social media platform Twitter.

Henry Ford was better known for his revolutionary vision rather than his profit margins. He was at the forefront of the manufacturing of inexpensive automobiles made by skilled workers on steady wages. In 1914 Ford sponsored the development of the moving assembly line technique of mass production.

Like many other successful entrepreneurs, Gates dropped out of college to start his own business. Gates started Microsoft with his business partner Paul Allen in 1975, when he was just 20 years old.

Kroc met the McDonalds brothers in 1954 and together they transformed the McDonalds burger restaurant into a franchise. After six years Kroc bought the brothers out of the company and by 1965 there were over 700 restaurants across the United States.

At the young age of 13, Lord Sugar was already making more money than his dad, who was a tailor, by boiling beetroots, making ginger beer and selling photographic film to school friends.

Alyson Eyval is a Business Advisor working in the Enterprise Services team at Business West. The start-up team can provide a variety of support to suit the needs for start-ups and entrepreneurs

Schultz wasn’t the founder of Starbucks, but he brought the idea of selling cups of coffee to the company, which originally just sold coffee beans. He eventually purchased the company in 1987 and made it the success it is today.