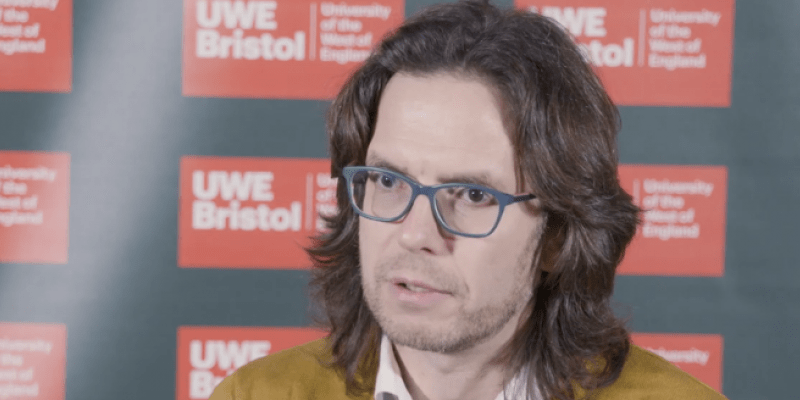 UWE, in partnership with Business West, runs an annual lecture series that brings top business leaders to Bristol. We caught up with Xavier Brice, Chief Executive of Sustrans before he gave his talk ‘Living and moving well together’.

There’s a sort of a heaven scenario and a hell scenario.

The hell scenario is if we believe that technology is going to save us. If we think that, for example, by turning all our metal boxes into electric metal boxes and self-driving metal boxes, we will solve issues of congestion, climate change and poisoned air - we won’t.

What we’ll actually find is greater demand than ever for moving around, shuttling around in our metal boxes, and whilst we might solve some of these things, it won’t actually look that much different than today.

I think the other option is that we actually work out how to change transport, so that it serves us and helps us live better. In that scenario what we’ll probably find is that, actually, we spend more time walking, cycling electric bikes or otherwise, and transport better shapes how we want to live, rather than being seen as something that just shuttles us around from A to B, and everything fits around technology.

I think, in reality, it will be somewhere between those two. I’m hoping it will be more like the heaven option.

2. What are the main obstacles for more environmentally friendly transport?

So, the first thing that stands in the way is what you might call ‘sunk interests’.

Capital, beliefs, technology is what we’ve invested to date.

Currently we’ve got petrol stations, we pump oil everywhere, the disruption (posed by electric cars) to that supply chain is huge. However, if you think about it, we’ve got to a point where we are able to transport a highly flammable liquid around the country so that pretty much within five minutes of where you live, you can access it.

Compared to that, setting up some electric car charging points and providing more generation, whilst a challenge, is not that hard.

But, obviously, there’s all the capital that’s invested. The oil majors that are getting very good at talking about new energy, 95% of their capital, in most cases, is invested in the old way and it’s going to take some time to change that.

Back to the challenge of climate change, it is hugely resource intensive. We’re going to need to mine the ocean to provide the chemicals to provide the batteries to power electric cars. It is hugely energy consuming to get in a metal box to move a mile to buy a pint of milk.

And that has to change and that’s not about technology, that’s how we think about transport, how we plan our places and how we want to live. And I think that getting over that obstacle, that’s the biggest barrier, the mindset shift, but the good thing is it’s just a mindset shift.

If we can do that, we can surely get over the other barrier.

3. What advice would you give to students looking for a career in transport?

No matter what you’re studying it has relevance to transport.

The second thing to say is don’t worry if you don’t find a job in transport initially – I didn’t.

I’ve long been interested in transport. I did my geography A-Level projects on railway lines, but I got to transport in the end, and I think I was richer for it.

And so, I think it doesn’t really matter what route you take, keep an interest and keep a passion in it.

But then my third and slightly more practical and pointed bit of advice: there are lots of options out there and if you know you’re interested in a particular aspect of transport, such as transport planning, then go down that route and see where it takes you.

There are generalist options out there, so there are graduate training schemes offered by train operating companies such as Network Rail for example, so take those and of course you can always come and work at Sustrans as well!