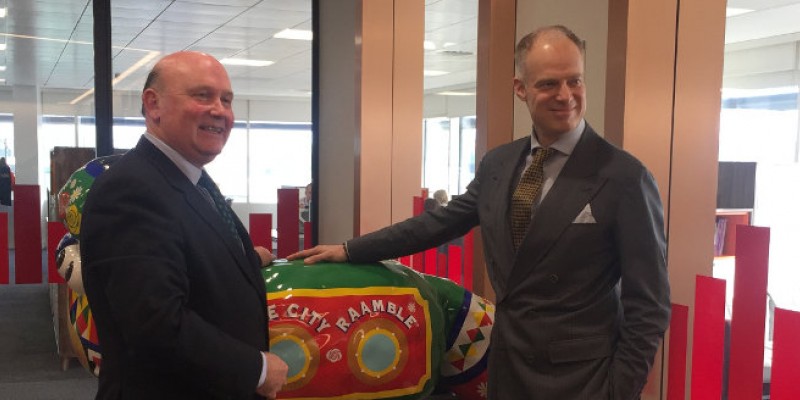 Hungary is a close friend to the UK, with shared values of trade, science and innovation and defence cooperation.

In light of this, the Hungarian Ambassador to the UK, His Excellency Mr Szalay-Bobrovniczky, was in Bristol recently to meet business, political and technology leaders, including Business West, PwC and West of England Mayor Tim Bowles.

The first port of call for Mr Szalay-Bobrovniczky’s touring party, which included

Sitting at the heart of the Bristol business community, the Engine Shed is a leading creative, business and technology hub.

A collaboration between Bristol City Council, the University of Bristol and the West of England Local Enterprise Partnership (LEP), the Engine Shed is home to tech and innovation organisation, TechSPARK, which plays an influential role in bringing together businesses, entrepreneurs, academics and social innovators from across the city to collaborate.

TechSpark Managing Director, Ben Shorrock, gave an overview of the organisation’s contribution in Bristol and emphasised how our shared strengths in science and technology are a significant opportunity for both the West of England and Hungary.

Following a brief tour around the Engine Shed, the delegation took a short walk through the heart of the Temple Quarter Enterprise Zone to reach the regional headquarters of international advisory firm PwC.

They were warmly welcomed by West of England Metro Mayor, Tim Bowles and staff from Business West, the business support and leadership organisation which runs four of the Chambers of Commerce in the region

PwC Advisory Manager, Dániel Bognár, who is based in Budapest, gave a short introduction to PwC’s UK and Hungarian operations, before a discussion regarding potential collaboration between INPUT companies and South West regional tech companies took place.

From there the Ambassador and delegation paid a visit to Ultrahaptics – a technology firm also located in the Temple Quarter Enterprise Zone.

Ultrahaptics is a unique Bristol success story. Founded by Bristol University postgraduate Tom Carter in 2013, the company is a global pioneer in developing ultrasound technology to create tactile sensations in mid-air.

Having secured more than £10m seed funding in 2015, Ultrahaptics technologies and applications are sold in numerous countries around the world and are having a significant impact in a variety of industries including the automotive and healthcare sectors.

Orestis Georgiou, director of research and Steve Cliffe, CEO at Ultrahaptics gave a fascinating tour of their offices, allowing the delegation to get hands on with the company’s truly ground-breaking technologies.

Underlining the importance of maintaining strong biltateral trading relations between the UK and Hungary, Ultrahaptics’ Hungarian born tech developer … was delighted to give compatriot Mr Szalay-Bobrovniczky an overview of the world leading technology he was helping to develop in the heart of Bristol.

His Excellency Mr Szalay-Bobrovniczky’s visit was part of broader efforts nationally and locally to continue to deepen bilateral ties between the UK and Hungary.

“It was a pleasure to meet the Hungarian Ambassador and sow the seeds for a productive ongoing relationship between West of England companies and Hungarian companies. The economic relationship between the UK and Hungary extends across a wide range of sectors including telecommunications, electrical machinery, pharma and manufactured goods, making Hungary the UK’s third largest export market in Central and Eastern Europe.”

“I was delighted to meet the Hungarian Ambassador to talk about the West of England and the opportunities we have to work together on trade and investment. The region is one of the country’s economic success stories, we host world-leading clusters in sectors such as aerospace and advanced engineering, financial and professional services, creative and digital and I am always pleased to share our story.”