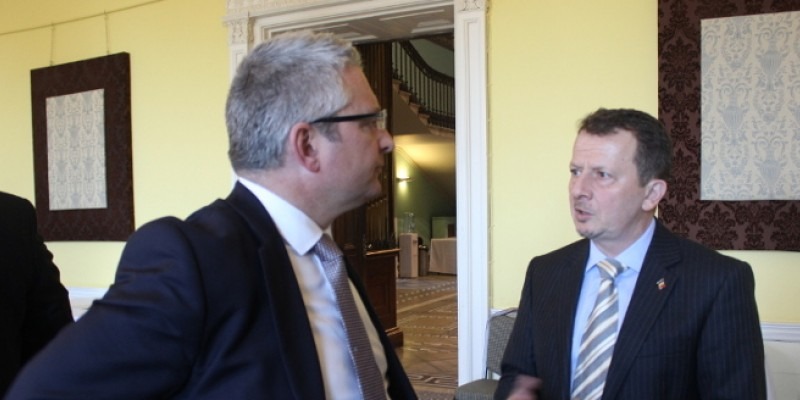 His Excellency Dr Dan Mihalache, Romanian Ambassador to the UK, and Manuel Donescu, Minister Counsellor for the Romania economics and trade section in London, attended informal trade talks at Business West’s Leigh Court headquarters to gain insight into business views and greater clarity on bilateral trade between the two nations once the UK leaves the European Union.

The meeting, which was organised and chaired by James Durie, Chief Executive of Bristol Chamber & Initiative at Business West, was attended by a small group of exporters to Romania from the West of England, such as Rolls-Royce PLC.

Romania acceded to the EU in 2007 and the UK and Romania currently share a mutually beneficial trading relationship, which saw over £1.5bn worth of British goods and services sold in Romania during 2016 alone.

In light of the fact that a significant proportion of this was traded from the West of England, a common purpose informed the agenda: to maintain the economic and business ties that links the region with Romania post-Brexit.

A spokesman for His Excellency the Ambassador Dr Dan Mihalache commented:

“For the best part of a decade, business and economic linkages between the UK and Romania have flourished.

“However, the UK’s decision to leave the EU by March 2019 has created a great deal of uncertainty for businesses in terms of the nature of our future trading relationship.

“Since the referendum, the Ambassador and his team have worked tirelessly to sketch out a future for bilateral trade with the UK by reaching out to prominent business leaders in key economic regions such as the West of England to ensure that trade can continue fruitfully between our two nations.

“A total of six product groups make up more than 86% of the Romanian exports to the UK, including machinery and electrical equipment, textiles and garments, vehicles and transport equipment, furniture, agri-food, plastics and rubber. We want to ensure that this mutually beneficial trade continues to prosper.”

On the importance of maintaining business and economic relations between the West of England and Romania James Durie commented:

“The West of England is home to a large number of companies that enjoy tariff free trade with Romania, including the chemical and defence industries for instance.

“Theresa May’s indication of a hard Brexit is a concern for the local business community. As long as uncertainty over the shape of our future trading relationship with Romania continues, investment and economic growth will be affected.

“The Ambassador and I are resolute that the South West needs to remain as open and accessible for business with Romania beyond Brexit and the joining of our respective business communities is a step in the right direction.”

Dr Razvan U Constantinescu, Honorary Consul of Romania in Bristol, will continue to liaise closely with Bristol Chamber of Commerce and Initiative throughout Britain’s Brexit negotiation on behalf of Ambassador Mihalache.