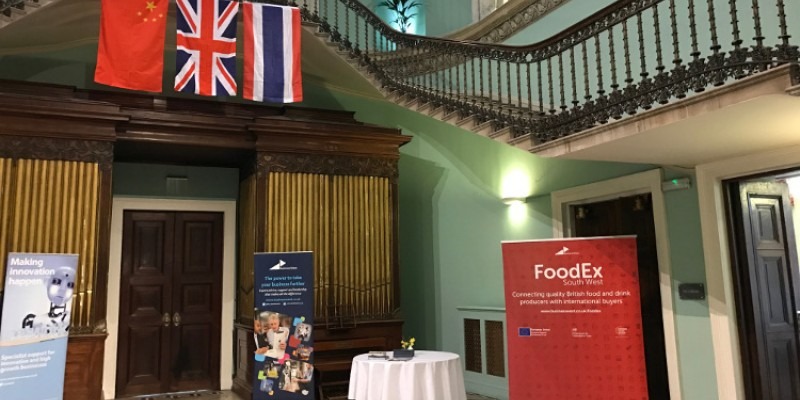 Despite growing concerns about the UK’s ability to trade internationally post-Brexit, the event has attracted a myriad of novice and experienced exporters.  Some looking to expand on the orders they are already fulfilling across the globe, and others who are attending in the hope of securing their company’s first international sale.

FoodEx South West, a programme started by Business West and the UK government has been growing in popularity since its launch last year. It’s hoped that this second  flagship ‘Meet the Buyer’ event will succeed in pairing local food and drink producers with Chinese and Thai buyers in a bid to enter what some may perceive as a difficult market for very small British businesses.

“UK food exports totalled £20 billion in 2016, an increase of 9% against 2015. But those to China grew by a staggering 49% last year, entering the top 10 key markets for the UK for the first time, “ says  Antoaneta Becker, Director Food and Drink for the China-Britain Business Council. ”The emergence of afternoon tea culture and growing interest in British craft beer among Chinese middle-income consumers are creating more opportunities for branded UK food and drink exports.”

The South West of England is a renowned region globally for its quality food and drink produce, and luxury chocolate, cider, cheese, tea, fudge and a huge range of ales were just a few of the products attracting strong interest from the buyers who represent mainstream distributors from China mainly from China’s premier supermarket chains. This week, 62 deal-making 1-2-1 meetings between producers and buyers took place, and international trade experts such as Jonathan Smith, Business West’s Market Specialist for China are on hand to answer any questions the producers may have.

FoodEx South West offers a range of free support for food and drink companies who are looking to export their produce. This support service includes promotion of products to international buyers through an online directory and a virtual trade fair, as well as advice on IP, import tariffs, documentation and trading regulations.

The China-Britain Business Council is Business West’s designated partner for the EU-funded Export for Growth programme.