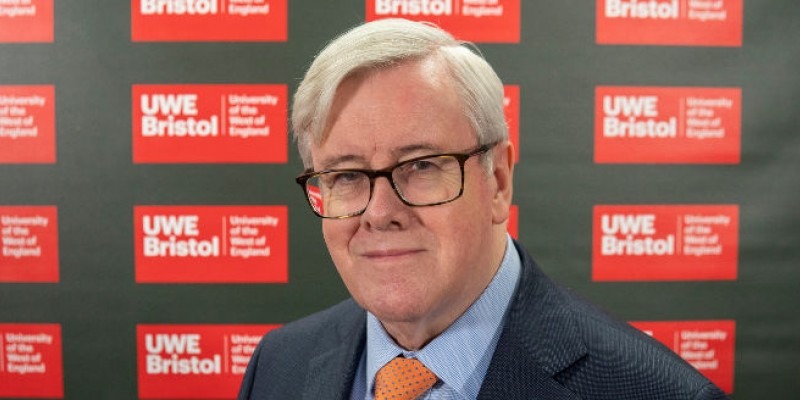 UWE, in partnership with Business West, runs an annual lecture series that brings top business leaders to Bristol. We caught up with John Allan CBE, Chairman at Tesco and Barratt Developments and President of CBI, before he gave his address:

1. As President of the CBI, what are your thoughts on the Prime Minister’s failed attempt to get her Brexit deal through Parliament?

I think as a nation we’ve got a huge challenge, but also a huge opportunity.

We’ve been urging government for some time to make a reality out of trying to find a solution to this very difficult situation we’ve got ourselves into.

We’re approximately 70 days away from crashing out of the EU without a solution, without a deal, which most business people, I think, believe will be seriously damaging.

2. You are Chairman of Tesco and Barratt Developments, which are both in sectors that are facing huge challenges due to Brexit. How much of your time is spent in discussions about Brexit?

I think it’s a distraction for everyone, isn’t it? But perhaps more for some than others.

I think large companies, in a sense, have it easier because they’ve got the management resources to do the planning and take actions necessary to prepare for a no deal Brexit.

It’s still going to be expensive, damaging and detrimental to the future in terms of jobs, but at least the larger companies are capable of handling it.

I worry far more about small companies that are sitting there wondering what the heck they should actually do without the resources to do it.

Even if they know what they need to do they might not have the resources to do it.

I’m fortunate to be chair of two large companies with very, very accomplished management teams and I help them where I can, but they pretty much get on with it.

3. What would you say to people just about to graduate about the future of the world of work?

People need to start thinking about what they’re going to do. They don’t necessarily have to make a career choice for life anymore, however.

One of the ways in which society has changed and careers have changed is that people have the chance to try a number of things, but I think you’re going to do much better if you’ve got some clue about what you want to do before you graduate or possibly before you start your course.

I’ve got a 15-year old granddaughter and she’s already worked out what she wants to do and what she needs to do to get there, and I wish everyone was as prepared as she is.

It’s not a black future, it’s a challenging, changing future where a lot of people will be able to continue to do very well.

4. What skills do you think people will need in the future?

I think people are certainly going to have to have a degree of comfort with technology.

That doesn’t mean they’re going to have to be experts, but I think technology is going to pervade almost everything we do.

I think it’s going to continue to be very important for people to have the sorts of inter-personal skills that enable them to work with people and enable them to bring groups together to produce a result.

The government could do with a bit of that at the moment.

Leadership skills and drive and determination are still important – I don’t think that’s changed at all.

When I was doing graduate recruitment, I tended to recruit more on motivation than academic achievement because everyone that comes out of university has got a decent level of intellectual capability. They’re bright enough to do what’s needed.

I’m sure UWE and every other institution continues to produce loads of young people who have those qualities.

5. What is your agenda between now and 29 March when we leave the European Union?

We are continuing to work with businesses and other business organisations to make sure that the government as a whole is aware of how serious the downside would be if we crash out of the EU.

It’s already putting at risk investment. Jobs are being transferred out of the UK.

Businesses are spending hundreds of millions of pounds preparing for something that hopefully will never happen and the government are doing the same.

So, we’re doing everything we can to raise the levels of consciousness regarding how serious this is and get the government to take the actions it could take to revert that.

We’re also encouraging our parliamentary leaders to come together.

It’s not our job to devise a parliamentary solution, but I think it is our job to say to the politicians: “for heaven’s sake, get together, sink your differences and come up with a solution that is capable of commanding a majority in the House of Commons.”

If people put aside their preconceptions, rub out their red lines and approach this with an open mind and willingness to work together, I’m pretty sure a solution could be found quite quickly, so we’ll be encouraging people to do that.

And so will businesses large and small, because they’re feeling the impact of Brexit already even before it’s started.