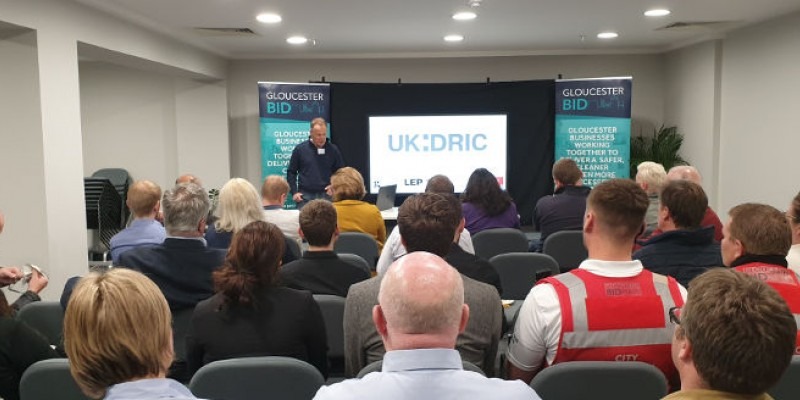 I went to a meeting about the future of Gloucester’s city centre shops the other evening, and I have to say that the passion shown by the traders and owners of these businesses needs to be bottled.

When you have passion for change like this, you must ensure it is encouraged and put into a realistic plan.

The foundations of the plan, and the enthusiasm of the traders was evident when members of the Gloucester Business Improvement District (BID) met at the new UK Digital Retail Innovation Centre (UK DRIC) which is actually housed on the top floor of the Eastgate Shopping Centre.

It is going to be officially opened by a government minister at the end of May, and is a bold step forward by Marketing Gloucester and GFirstLEP to try and come up with some answers to the crisis on our high streets.

In the case of Gloucester, this is evidenced by 18% of the city’s shop units currently vacant. The national figure of empty shops in cities is around 12%.

So, it isn’t a pretty picture.

But there is an innovative experiment about to start here with the aim of bringing more business to the city’s shops.

And it makes a lot of sense.

For the first time, Gloucester’s traders will be given the social media tools free of charge for a period to get to know more about their customers’ needs and as a result, hopefully attract more shoppers.

In a nutshell, the experiment involves using social media very cleverly to listen to what Gloucester’s shoppers are saying.

It seems to make sense.

And it made even more sense to me and those traders when Polly Barnfield, chief executive of the Maybe* social media platform, gave some news that really shocked all of us in a nice way.

Where was Gloucester as a place now - at this minute- on the online ladder?

“Give yourselves a pat on the back”, said Polly,” Gloucester as a place now ranks 12th out of the UK for social media performance.”

I was staggered at that placing. I got the fact that Birmingham was at no. 9 because of its size and no real surprise our near neighbours, Cheltenham, were at no. 8.

Polly was convincing in her rationale about the BID customers here in Gloucester.

“Can you honestly say you know what your customers are saying about you today?”, she asked.

“Now, in the palm of your hand, you will be able to see where you rank as a business, who your customers are and how your competitors are working.

“Never forget, it is your customers you are in charge of. You need to understand what they are saying about your business and Gloucester as a place.”

Maybe* are online savvy people, and one of the country’s retail gurus, GFirstLEP chair Diane Savory, formerly of Superdry, has been helping to drive this shopping experiment with good backing from Marketing Gloucester’s enthusiastic team.

That’s all well and good and very exciting.

But for Gloucester’s city centre to come alive and attract people to come back to its historic gate streets, we are going to need a lot more than an online magnet.

We are going to need a very clear vision from Gloucester City Council on the development of the city centre and its shops so that people are happy there.

When I served as vice chairman of the Gloucester Heritage Urban Regeneration Company - formed back in 2006 - we had a clear vision and stuck to it.

We called it The Magnificent Seven - in terms of all the building projects.

The city council must do similar. They must have a realistic plan to sustain the shops and encourage the growth of our independent traders.

In my view, Gloucester needs to have more of a beating heart at its centre - more people actually living in the city.

Just look up at some of the accommodation above the shops in Westgate Street, for instance. Lovely places. Most are empty.

And there must be a determined effort to sit down with the landlords of these empty shops and see how we can all work together to stop the city becoming down at the heel.

For years, we have talked about improving the night time economy. But little has happened, and it is far from a welcoming place for families at night.

At the same time, we must renew the fight to ensure the painful business rates paid by our shops in some way find a way back to help our beleaguered traders.

Business West is determined to help and bring people together.

Yes, the council must bottle the passion and enthusiasm of the traders ably led by BID chair Nick Brookes.

It’s a good start for us to know that little old Gloucester is now climbing the social media ladder as a place.

We just need to be proud of this once great city.