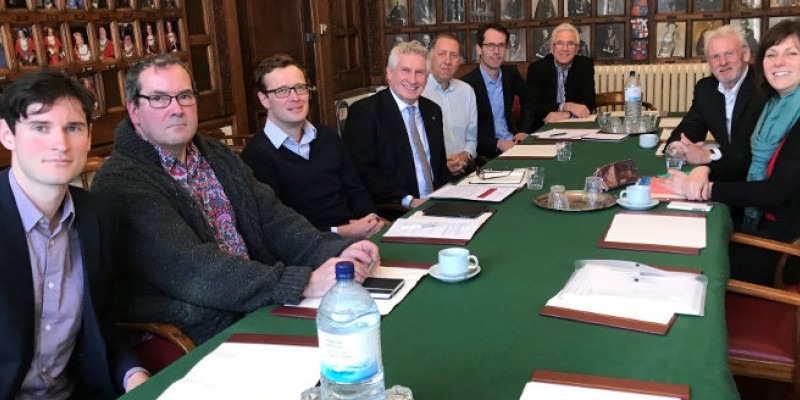 As the Chamber of Commerce for Wiltshire, we are working closely with firms in the county to help get clarity over the likely shape of the UK’s future trading relationship with the EU and to convey business concerns and priorities to government and our representatives in Parliament.

A group of Wiltshire businesses recently sat down with Claire Perry, MP for Devizes and now a Cabinet Minister in the Department for Business, Energy and Industrial Strategy, to discuss the issues surrounding Brexit that matter to them.

Claire campaigned for the UK to remain in the EU before the referendum and was one of only seven Conservative MPs to vote in February 2017 for an amendment suggesting that parliament should have the final say on the Brexit deal.

The meeting in Malborough Town Hall began with Claire outlining her position on Brexit – stating that she campaigned passionately for Remain but on the basis that the result of the referendum must be respected. She also said she believed that a ‘no deal’ outcome would be ‘a disaster’ and that securing a smooth implementation period will be paramount for business.

Claire recognised the vital importance of the EU market to UK business, noting that trade relationships tend to decline by geographical distance. However, she was quick to point out that there are plentiful export opportunities for UK businesses globally, and that Brexit will offer real scope for improving trade relationships with other markets around the world.

Businesses including Whitefield International, Visit Wiltshire and Royds Withy King went on to voice their concerns.

Crispin Herrod-Taylor of Crookwood Audio Engineering, a designer and maker of professional audio products, said for his business it’s currently as easy to sell to Berlin as it is to Brighton, but that Brexit will make things more difficult for companies exporting to Europe.

His experience of trading with Norway – outside the customs union – makes Crispin nervous of the likely customs implications of Brexit, noting that this market adds an additional 25% in cost and an extra 1 to 2 days in shipping compared with EU markets. He also has to fill in 4 pieces of paper and classify each product he sells in Norway against a customs category database.

Furthermore, VAT and duty payment issues associated with returning items for repair are likely to create cashflow issues for Crookwood post-Brexit, affecting their B2C sales. While large companies may be able to deal with these changes more easily, Crispin was sure that smaller e-commerce companies like his own would be less competitive outside the EU.

He added that, post-Brexit, HMRC would more easily be able to overcome customs obstacles by focusing first on facilitating business, and then on collecting taxes, rather than the other way round.

Alex Scott of TH White, an agriculture parts and machinery distributor based in the county, reported that confidence among many of his customers has been shaky since the Brexit vote. Concerns around issues such as food tariffs mean that many in the industry are being more cautious in their investment decisions.

Visit Wiltshire’s Peter Wragg raised concerns about the effect of EU workers leaving Britain in sectors such as hospitality, and highlighted the importance for UK employers in accessing the skills of EU nationals. Claire agreed that a visa system which is fit for purpose and responsive to the needs of the economy will need to be implemented, but also suggested that investment in training and upskilling in low-productivity sectors will be crucial for the domestic workforce in the longer term.

Following on from this there was a discussion around technical education, with Mike Harling of Whitefield International citing practices in Germany and the US as possible models for the UK to follow.

Swindon & Wiltshire Initiative Director Ian Larrard agreed with the imperative to expand and improve technical education nationwide and said that a new technical centre for the LEP area in Swindon would play a key role here.

Business West Policy Director Matt Griffith highlighted a particular skills gap in export compliance – something which was raised by businesses at recent Brexit roundtables with HMRC and DIT. At present, formal training options in this area are limited, but will clearly need to be ramped up significantly as the UK leaves the EU, and Claire took note.

The session ended with Claire suggesting that Brexit must serve as a wake-up call to improve and invest in UK skills and procurement, and that it must be used as an opportunity for industry to deepen the domestic supply chain.