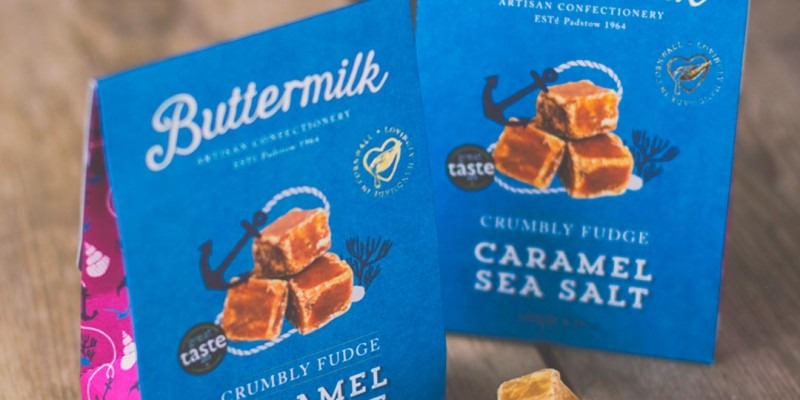 A confectionary company based in Padstow in Cornwall has increased its exports to the US by 300% in the last year.

To mark World Chocolate Day, we spoke to Buttermilk Confections which were established in 1964 originally as a couple of shops on the Cornish seafront. About ten years ago it was purchased by the current owners, David and Tracy Goad from David’s parents who set about creating the buttermilk brand.

About three years ago, the company started making dairy free products, which has now developed into a large range of plant-based confectionary.

Exporting was a natural extension of the company’s success in the UK and according to Gareth Toms, the company’s Commercial Director, it came about through enquiries from trade shows or direct contact from interested distributors.

The Department for International Trade (DIT) has supported the company for several years by introducing them to key distributors in areas such as the Middle East and the US.

The company has also received funding assistance from DIT to be able to exhibit at trade shows such as the Fancy Food show in New York in 2018. It has also attended various Meet the Buyer events where it has been introduced to key contacts.

The business also attended a trade show called ISM in Cologne (with DIT’s support) where they met with a buyer from the American wholesalers, Costco, leading to significant business. Gareth says: “the company’s growth during COVID has come directly as a result of this relationship with Costco and has grown the company’s US exports by 4x in the last year.”

Gareth says that while the company has found success in the market, exporting to the US has not been without its challenges. His advice to companies is:

“Make sure you can afford to do it, because its expensive to trade with the US. Don’t expect to make too much money in the first two years and have a very clear plan about how you’re going to access the opportunity.

“You must make sure your proposition is in line with the market. You can do this by ensuring your product pricing on shelf isn’t going to be a barrier to consumers purchasing your product.

“The supply chain in the US is very expensive and shipping rates have gone up since COVID.

“Once you’ve landed the products in the states, you’ve got the distribution costs to factor in. Everyone takes a margin. You might think you’ve got an agreed cost with a distributor that will get you a great price on shelf, but once you flow that through the whole supply chain, those costs escalate.

“You have to be well informed before approaching the market. You can do this by carrying out competitive product analysis or trying to really understand the variations in opportunities and expectations in different states.”

“Buttermilk Confection’s success in the US reflects the strong demand in the market for high-quality British food products.

“The company is growing from strength to strength and I would encourage companies looking to grow in the US to contact DIT to help get your export journey started.”

Buttermilk Confections are also part of the Great British Food Programme, an initiative delivered by Business West to support UK food & drink producers to engage with international buyers across the world with events, workshops, and an online directory. You can sign up to this here.