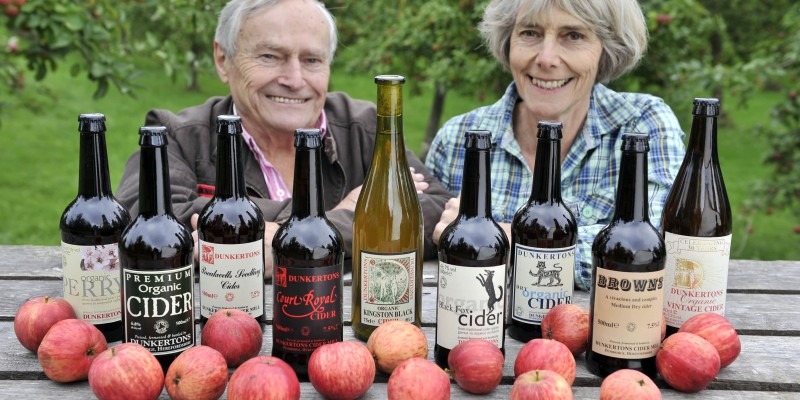 An organic cider company based in Cheltenham has successfully exported to Japan with its cider made using apples and pears from the Herefordshire countryside.

To mark World Cider Day celebrated on 3rd June 2021, we spoke to Oli Smith, Sales Manager at Dunkerton’s Cider about the company’s export success in Japan.

Dunkertons was established in 1980 by Ivor and Susie Dunkerton who wanted to leave the rat race in London to live a quieter life in the Herefordshire countryside where they could be more in touch with the environment.

After spending some time deciding how they would make use of the land they’d acquired, they decided to plant apple trees and perry pear trees to make traditional, organic cider.

Oli Smith, the company’s Sales Manager says that “back in 1980 the concept of organic was quite new and was even called ‘unsprayed orchards’, where no pesticides or herbicides were used.

“They wanted to make a cider that was in harmony with the environment, which is still the bedrock of the company’s values.”

The company initially began exporting to Japan after being approached by distributor Masato Kano of Travesia, who spotted a niche in Japan for organic, traditionally made cider.

“The main thing which has triggered a lot of our imports is the desire for high quality, premium cider. In most countries we export to, organic is key. Understanding where your produce comes from is important in Japan. They don’t just want something that is offered commercially or on a large scale in the U.K.

“There’s a shop that specialises in British products in Japan that is now selling our cider and a couple of weeks ago we were featured on TV in Japan with our dry cider.”

According to HMRC data, exports of cider to Japan have increased by 18% since 2015, evidencing a steady rise in demand for cider made in Britain.

While the company was approached by a Japanese distributor, it has received support from The Department for International Trade (DIT) in the form of ongoing strategic advice and introductions to potential customers. Oli said:

“Through DIT, the British Embassy in Tokyo have introduced one of our wholesalers out there to some hotel chains and customers.

“Stefano, our International Trade Adviser (ITA), has been really communicative and whenever I have called him, he has pointed me in the right direction if he can’t help himself.

“I had a good call with our contact in the British Embassy in Tokyo recently which was facilitated by Stefano. It was great to talk with them to open the door to possible further opportunities.”

In terms of the advice he would give to companies looking to export to Japan he said:

“Masato has visited our cidery and organic orchards so I would say it is critical to have someone on the ground who knows, loves and is as passionate about your product as you are.

"It has been a pleasure to work with Dunkertons Cider and I am confident the business will continue to grow from strength to strength over the coming months.

"They are an example of a British brand that is greatly sought after due to its high-quality, locally sourced produce. I can't wait to see where they go next."