The Business of Net Zero - commentary from Bristol's COP26 event 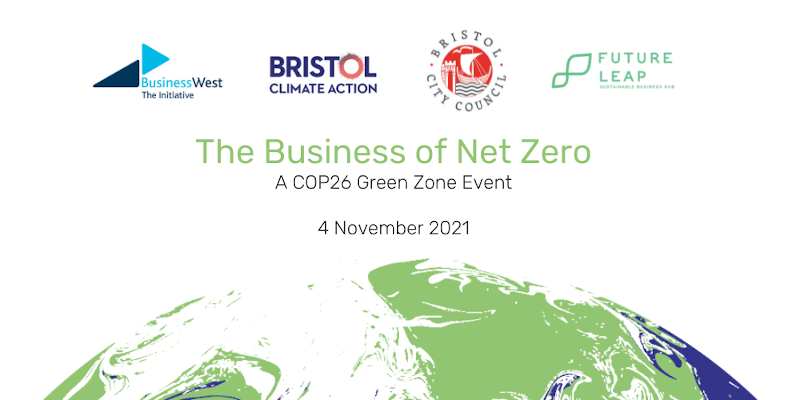 The hybrid event held at We The Curious was part of the COP26 Green Zone #TogetherForOurPlanet programme and was co-hosted by Bristol City Council and Business West, with support from Future Leap Network.

Until recently, the sustainable business movement has focused on the cost savings arising from greater carbon efficiencies. At this meeting, businesses across the region explored the opportunities emerging and how Net Zero is good for business.

Returning straight from Glasgow to attend the meeting in person, Mayor of Bristol, Marvin Rees spoke about the investment opportunities associated with decarbonising the city – decarbonising Bristol alone requires a £9bn investment. Fresh from talks with the Mayor of London and the Mayor of Los Angeles, he said cities need to develop the financial frameworks that enable public-private investment. He has high hopes for the City Leap, which seeks to bring in £1bn investment into the city’s energy infrastructure

Keynote speaker, Colin Skellett agreed with Marvin that the transition to Net Zero will require public-private partnership and reminded the audience the track record of long term public/private partnerships in Bristol, with examples such as the Cabot Circus development and the re-development of Bristol’s harbourside. Colin stressed the urgency that businesses needed to act, and told climate deniers to head down to the beach at Weston to put their heads in the sand.

Next to take to the stage was Simon Roberts, the Chief Executive of Centre for Sustainable Energy who had led on a study to determine what it would take for Bristol to be Net Zero by 2030. He explained that all businesses and organisations would need to decarbonise across their operations, supply chain and value chains as far as possible and as quickly as possible. Most of the technical solutions are available, it is behaviour change that is required, no more business as usual. He suggested that business should just get on and make progress and not wait until legislative measures come along.

In a panel led by Richard Bonner, COO at Arcadis and Chair of the West of England LEP, regional plans for the area were explored in some more detail. Ann Cousins, a Sustainability Consultant at Arup and Chair of the Bristol One City Environment Board, explained how businesses need to engage in local climate action as this is important to its staff. She described how the decisions being made at COP26 impact policies in the UK on its approach to decarbonising, most of the powers (targets, incentives, disincentives and legislation) to limit business emissions sit at a national rather than city level. A plethora of strategies are emerging, these are welcomed as they set out a clear direction however the required finance is still lacking, stalling progress. Stephen Peacock, Executive Director for Growth and Regeneration at Bristol City Council, also stated the need for more finance so that decarbonisation through heat pumps as an example can be scaled up quickly and a market established. Barry Wyatt, Climate Emergency Manager at South Gloucestershire Council, explained that opportunities lay in how planning is undertaken across the region, including planning out the need to travel and exploring how to re-open railway stations to reduce car dependency.

Panel discussion sessions followed exploring how businesses were decarbonising. In a discussion led by James Durie, Business West, attendees learnt that Rolls Royce plant in Filton is aiming to be Net Zero (in Scope 1 and 2) by 2023 – much of the decarbonisation is being achieved by installing solar PV, using ground source heat pumps, using controls and sensors to optimise the use of energy across the industrial site. Their approach was not dissimilar to family business, Wogan Coffee. James Wogan joined the business a few years ago. By questioning existing processes, he has for instance changed the sizes of the coffee boxes so that they are more efficient and can pack more coffee, switched to using cargo bikes for local deliveries and installed solar PV to meet some of their energy needs. For some businesses, their largest source of carbon emissions are from their supply chain rather than from their own emissions. Sophie Lawrence from Rathbones Green Bank Investment explained that their funds make up 99% of their own carbon footprint so their approach to decarbonise is to focus on decarbonising this area by working in partnership with others in their sector. Working in partnership was a strong theme throughout the meeting with attendees being shown the film created by the peer-to-peer Bristol Climate Leaders group demonstrating the benefit of working together and across sectors on reaching Net Zero.

In the next panel session hosted by Katherine Piper, Director at Future Leap Network, attendees learnt about emerging developments and growth opportunities. Mukti Mitchel from Mitchel and Dickenson, specialists in the retrofit of heritage buildings, explained the soaring demand for their services. Retrofitting historic buildings can reduce heat loss by 40%. A challenge for them is the lack of capacity and they find themselves having to turn down work. The growing demand, staff and skills shortages was echoed by Mitsubishi Electric that manufacture heat pumps. Elmtronics, an EV supplier and installer, and Edwards Vacuum that manufacture components for the EV and PV sector were also on the panel. This skills gap is seen as a real risk to businesses and the city being able to decarbonise at the rate that it needs to keep global temperature increases below Net Zero.

The audience were shown a series of filmed case studies, demonstrating how Proctor and Stevenson a creative agency; Burges Salmon, a law firm and Wiper and True and had the opportunity to hear from a number of organisations in the city with services to assist businesses to make progress to Net Zero.

Jaya Chakrabarti, Founder of Nameless, Tisc Report and Project Vana and President of the Bristol and West of England Chamber and Initiative closed the formal part of the meeting, reflecting on the discussions and asking the audience to sign up now to the One City Climate Ask, to aim for Net Zero by 2030.