First ever European Certificate of Origin through Blockchain 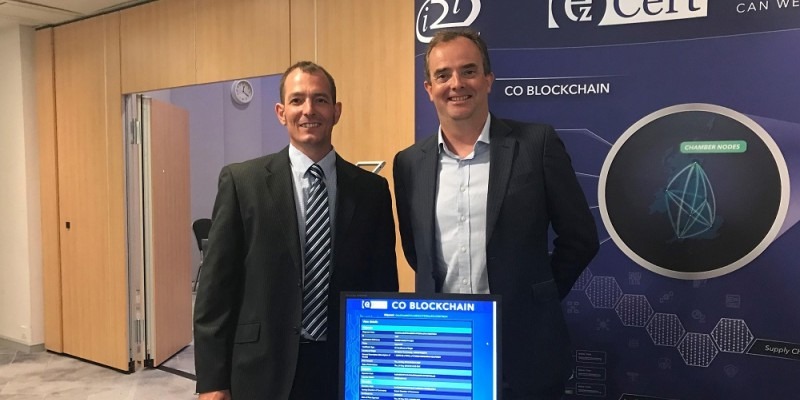 There’s been a huge amount of hype about Blockchain with many experts believing that it could be one of the major innovations of the last 30 years - including the internet.  Some go further and say that it could even be bigger than the internet was as far as the disruption it will cause. What the internet did for communications, Blockchain will do for trusted transactions and the global Blockchain market is expected to be worth $20 billion by 2024.

Once again, the West of England region proves itself at the forefront of innovative technology.  Business West Chambers of Commerce, working with its IT partner, i2i Infinity, has successfully processed the first ever European Certificate of Origin through Blockchain technology. The request was submitted by local engineering company, Renishaw, and is the first Certificate of Origin to be added to a Blockchain outside of South East Asia.

A Certificate of Origin is a document used by businesses trading internationally for customs purposes, to identify the origin of the goods that are being exported.  After Brexit, if the UK is not in the customs union, it will have to abide by complex ‘rules of origin’ whereby exporters will need to show the origin of each component in order to benefit from preferential trade deals.

James Monk, commercial director of Business West said they issue 30,000 certificates of origin each year and post Brexit that number might rise significantly.  These documents could be digitised and processed through Blockchain technology.

So, what is Blockchain?  In simple terms it is a new form of decentralised database.  A digital ledger of information stored chronologically in ‘blocks’, it allows for the efficient and nearly instantaneous processing and transfer of data.  It records transactions across many computers and doesn’t allow the record to be changed without the alternation of all subsequent blocks.  The technology should make the processes of sending goods abroad simpler and more transparent, reducing the risk of false declarations to obtain lower tariffs.

The technology is in its infancy and to be compliant with existing regulations, Business West also produced a physical document alongside the Blockchain but included a QR code that links directly to the Blockchain and a digital proof of certification.

“Business West has an established reputation in developing and using technology to simplify trading internationally. We are delighted to have worked with our IT partners i2i Infinity and Renishaw to process Europe’s first Blockchain enabled Certificate of Origin. Whatever challenges and opportunities Brexit may bring, we are certain that the more we can streamline and verify the trading process, the easier it will be for our clients.”

Renishaw, one of the world's leading engineering and scientific technology companies has a track record for trialling and leading on new initiatives. They were quick to take up the opportunity of being a part of this pilot project.

“Whilst Renishaw is well known for its innovative world leading engineering technologies, we actively apply innovation across all of our business operations. Therefore we are delighted to have been involved with this European first using Blockchain technology.”

i2i Infinity developed the Certificate of Origin Blockchain using Ethereum infrastructure and has a verification website that validates the certificate on the Blockchain which then displays the ledger records.

“We are looking to further develop the solution using Hyperledger Fabric which will enhance the solution, and align the technology development with the likes of IBM & Maersk.

“The UK has recently agreed to adopt the Union Customs Code (UCC) and HMRC is set to deliver a new customs declaration service which implements the rules of the UCC.  This includes key requirements - and digitised trade is one of those.

“This pilot is a demonstration of Business West’s and i2i Infinity’s ability to lead technology for international trade in the UK.”

Business West is planning to be at the forefront of international trade support post Brexit and this is just one of the many initiatives being developed by the organisation. The technology is currently in testing phase but the pilot project with Renishaw was a success and the aim is for the service to become common practice and pushed live through Business West’s online documentation service, Acorn International, at a future date.