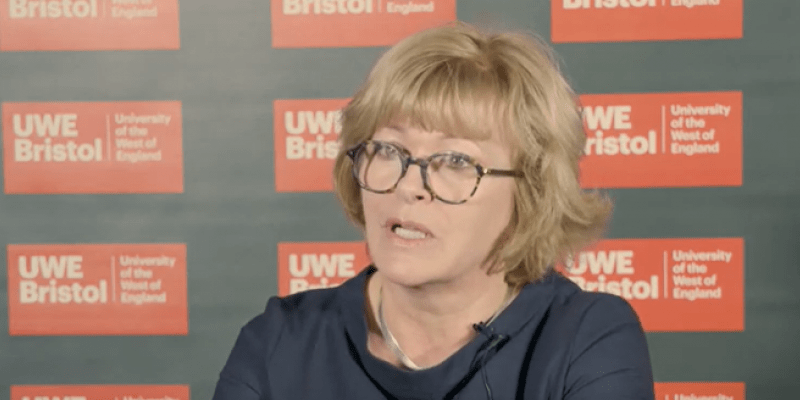 UWE, in partnership with Business West, runs an annual lecture series that brings top business leaders to Bristol. We caught up with Lisa Opie, Managing Director of BBC Studios before she gave her talk.

1. How can television be a positive force for change?

I think that good television reflects the audiences who watch it and they tell stories brilliantly. At its best, that’s what television does.

If you can engage people in stories that matter, that resonate with them, that are important to them, then television can change people’s minds and change communities for the better.

2. What is the most important quality a TV programme must have?

I do think it’s about this power of storytelling.

It’s about innovation. It’s about finding new and exciting ways of telling stories, sometimes they’re the same stories people have heard before, but it’s the way that you tell them that counts.

An example of that from me, most recently, would be a programme like Dynasties.

Many other people have made programmes about single species of animals, but none have made them quite like we did.

So, in the BBC’s Natural History Unit, we followed a single family of animals over a period of 2-3 years and told the story of that individual family.

We didn’t make it up, we didn’t cheat. That’s actually a challenging thing to do. There are many people who have made films that are fictional about animals and their families. But I think it was truly innovative, it was really engaging; it was like watching a Shakespearean play.

So, you may have seen lots of films about lions before, but you’d never seen a film quite like that, and I think that’s what’s really exciting about innovative television.

3. What advice would you give to students looking for a career in TV production?

So I’d say working in television is a brilliant thing to do. It’s a fantastic career, so I would advise anybody to go for it.

I also think we have skills shortages – the likes of which we’ve never had before - because the whole globe recognises that the UK is a great source of creativity and we make great television content.

So, there is a demand for people, new people to come into television and work in television.

My single piece of advice is be persistent. It’s all about tenacity.

It’s a predominantly freelance market, which can be tough, and it means you need to be bold, keep going at it and have self-confidence.

And it’s worth remembering we, as an organisation, as an industry, need fresh people to come in. We need greater diversity and new voices in television and people have a job to employ new people, so push them. Be persistent.